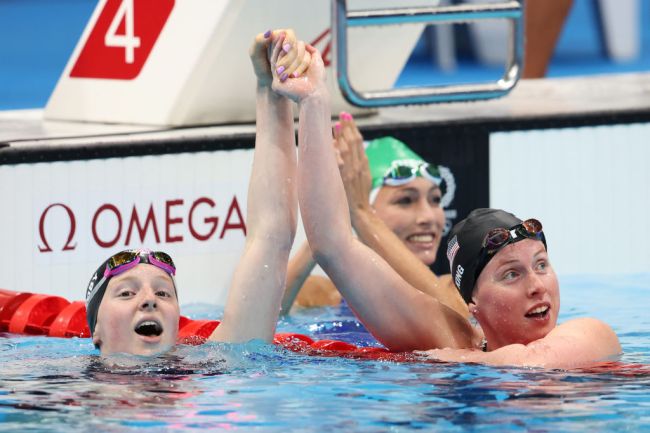 Alaska is not a hot bed for swimming but Lydia Jacoby doesn’t care what history has to say. The 17-year-old senior in high school hails from Seward, a town of 2,773, and just won a gold medal.

Jacoby swims the 100-meter breast stroke and came out of nowhere on the final 50 meters. She trains in a 25-meter pool — because there is only one Olympic-sized pool in the ENTIRE STATE — so it would make sense that her push would be insane.

The 17-year-old from Alaska has DONE IT for @TeamUSA! #TokyoOlympics x @USASwimming

As Jacoby came across the line, her hometown and her family went nuts.

Not only was it an epic win, but it was historic. Jacoby became the first swimmer from the state of Alaska by competing, and the first to win gold by taking down South Africa’s Tatjana Schoenmaker, who took silver, and the United States’ Lilly King, who took bronze.

They were pumped for Jacoby.

King was considered the slight favorite in the race after years of dominance, so it was also something of a changing of the guard.

THE QUEEN OF CONFIDENCE.@_king_lil is ready! #TokyoOlympics x @USASwimming

For Jacoby to qualify for the United States was something of a surprise. For her to push down the final stretch like that was absolutely epic.

She will head to Texas as a freshman this year. Hook ’em.