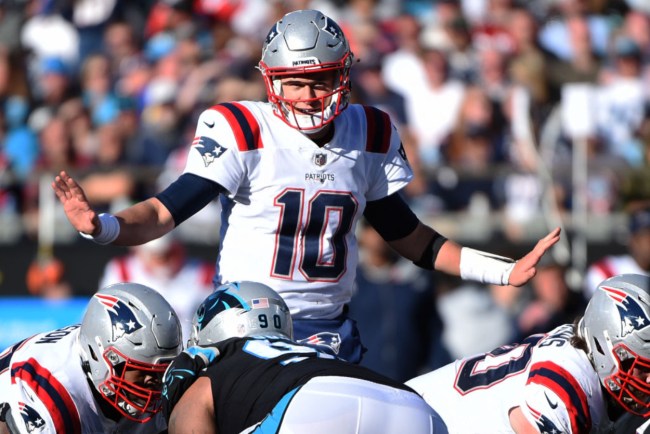 Mac Jones led the New England Patriots to their third straight win on Sunday beating the Carolina Panthers 24-6 on the road, but it’s not Jones’ play under center that people are talking about following the victory.

During the first quarter, Jones lost to football after being sacked from behind by Carolina linebacker Brian Burns. As the ball bounced away from him, Jones grabbed Burns by the ankle and held on until he fell to the ground.

Close-up video courtesy of NFL Films clearly shows Jones hanging onto Burns by the ankle as he twists and falls to the ground. You can be the judge on whether or not Jones actually twisted Burns’ ankle or not, but all in all, it was a pretty gruesome sequence as Burns left the game with an ankle injury. He later returned to the game but left again because of the ankle.

Not to belabor the point, but you won't get a better look at the Mac Jones ankle twist than this one from NFL Films. You can clearly see the grab, the trip, and the roll. It's not great. pic.twitter.com/pBjUnqJ8Wc

Panthers fans aren’t the only ones calling out Jones for the play. Linebacker Haason Reddick made it clear after the game that he wasn’t happy with Jones’ actions either.

“Definitely thought it was a dirty play,” Reddick said. “I actually saw and witnessed the play while it was happening. At first, it felt like he was trying to trip or kick Burns. And the next thing you know I saw him tugging on Burns’ ankle. I thought it was completely dirty. Hopefully, it’s something the league addresses.”

The one argument you could make in defense of Jones holding on to Burns was that he thought that Burns actually recovered the football and he was trying to make a tackle. Even if that were the case, it’s not the best of looks for Jones.