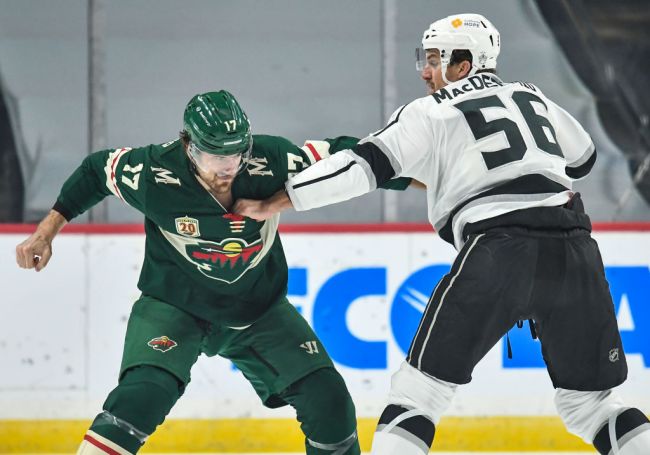 Hockey players are a different breed. In tonight’s game between the Wild and the Kings, Marcus Foligno and Kurtis MacDermid dropped the gloves simultaneously with the opening puck drop. The Minnesota winger and Los Angeles defenseman had themselves a go right out of the gate, fighting for about 19 seconds before the referees broke it up. MacDermid is 6-foot-5, 233 pounds while Foligno stands two inches and 10 pounds lighter. It was the bigger man who won the scrap, but the underdog landed a strong right before he eventually hit the ice.

It’s pretty wild how hockey players agree to fight one another before a game even begins, and it’s even crazier when there is no clear root for the decision. Neither MacDermid nor Foligno have any notable beef in the past. While they were chirping back and forth before the game began, one of them asked the other if he wanted to get after it. He accepted.

Here are some more recent bouts:

And just for fun, here are some of the craziest kerfuffles at any point in the game:

Thursday’s 1-on-1 matchup wasn’t nearly as insane as some of the others and that’s okay. A good fight is always worth the watch. Keep doing that hockey, hockey.