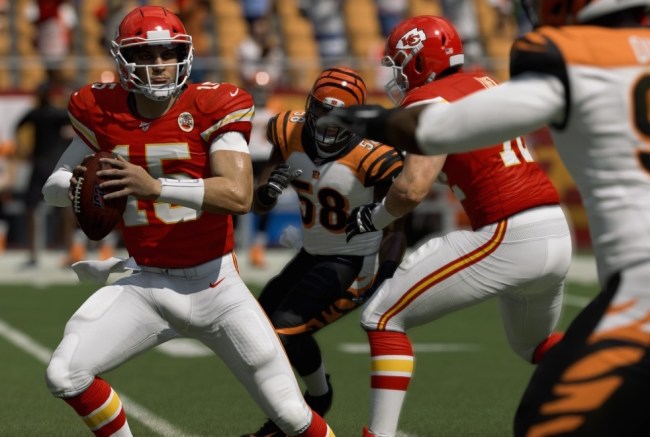 In the 1970s, Atari blew everyone’s mind when it introduced the world to Pong, which was basically a table tennis simulator that featured a small dot that could be bounced back and forth using a couple of white lines on a black screen, which sounds basic but was actually revolutionary for its time.

In the following decades, games simulating virtually every sport in existence were released with increased amounts of realism—including John Madden Football, which allowed fans of America’s game who had access to a personal computer in 1988 to customize a variety of aspects like weather, injuries, and penalties but featured a notable lack of NFL teams and players thanks to licensing issues.

The same cannot be said for 1991’s Tecmo Super Bowl, which was released with the blessing of the league and the inclusion of possibly the most dominant athlete in video game history: Bo Jackson, who could do things that made the virtual version of Michael Vick in Madden 2004 look like a scrub.

However, by the mid-90s, EA obtained the rights to feature NFL teams and the players on their roster, and from that point on, Madden became the gold standard for football video games. It was also really the only option fans had until the arrival of NFL 2K, which continued to put a dent in Madden’s market share with each annual release until EA signed a deal with the NFL in 2004 granting them the exclusive rights to the league’s properties.

From that point on, the franchise has highlighted the potential pitfalls of allowing monopolies to go unchecked, as even though it constantly boasts about the innovations featured in its yearly installments, it seems like they’re usually limited to slightly-tweaked physics engines, a smorgasbord of features commonly described as “dynamic,” and the gradual removal of aspects of the game that made it more enjoyable.

There was a glimmer of hope the landscape could change a few months ago when 2K announced it had inked a deal with the NFL that would allow it to produce “non-simulation” titles, a fairly vague term that basically refers to games that don’t provide a realistic reflection of what you’d expect to see at an actual sporting event.

As a result, the company wasn’t going to really be able to take on Madden any time soon, but on Thursday, EA made sure it’s not going to have any direct competitors in the immediate future after signing a deal to ensure they’ll be the only company that can produce a realistic football game until at least 2025.

Per source, NFL owners just voted to approve an extension of their deal with Electronic Arts. This one will run through the 2025 season (and through 2026 if revenue markers are hit).

So when it comes to that kind of game, it'll be Madden for a while.

EA might have pulled a muscle patting itself on the back in a press release it issued where it praised the success of Madden and hinted at what’s to come, saying:

EA SPORTS, the NFL and the NFLPA will partner on innovative new experiences and more ways for fans around the world to connect with the excitement of NFL football. This will include games in new genres with more forms of play and self-expression, available on more platforms, including expanded offerings for mobile players. Esports will also continue to grow, with increased competitive programs and broadcast content to reach and entertain more fans.

This partnership will also focus on design, visualization and development innovations to grow and deepen the world of Madden NFL, impacting how it plays and feels, and how players connect to the world of the NFL as it happens.

Those are certainly some solid goals, but I’ll believe they’ll release a game without 138,985 different glitches like they seem to do every single year when I see it.