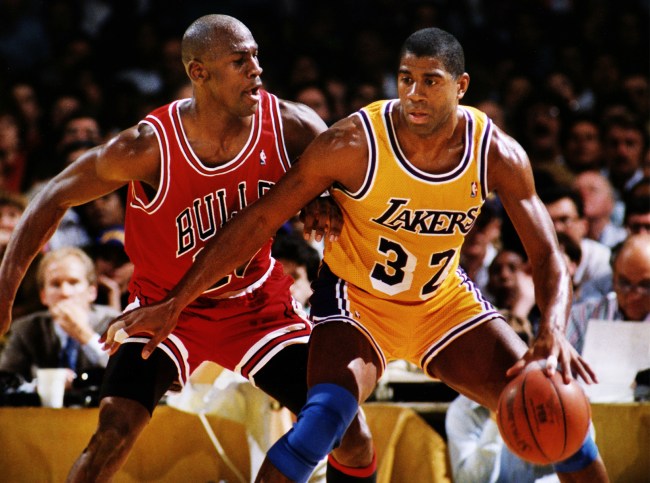 Magic Johnson saw Michael Jordan snatch away his torch as the best player in the league back during the 1991 NBA Finals, when MJ’s Chicago Bulls’ beat Magic’s Los Angeles Lakers’ 4-1 for Jordan’s first of six championships. At the time, nobody knew that the Bulls would end up playing in five of the next seven NBA Finals’, winning a title in each of the appearances they made, but that’s why Jordan is presumed to be the GOAT nowadays.

During the 1991 NBA Finals, Michael Jordan averaged a ridiculous 31.2 points, 11.4 assists and 6.6 rebounds per game, upstaging Magic Johnson on the biggest stage — who had already captured five NBA titles of his own during an incredible run during the ’80s. But the ’90s was all about Jordan, and his remarkable shot against the Lakers in Game 2 of the ’91 Finals is remembered as the definitive moment he became the biggest superstar in the league. The degree of difficulty is wild, with MJ switching hands midair as his trademark tongue wagged out of his mouth. Take a look below to revisit one of the most legendary shots ever seen.

Fast-forward nearly 30 years later, Magic Johnson still hasn’t forgiven Jordan for doing the Lakers so dirty. In fact, while talking to Brandon ‘Scoop B’ Robinson at Heavy, Johnson even described how he still “hates” Michael Jordan, and describes the spectacular shot as being the best he’s ever seen.

“He takes off on the right side, we thought we had him so we all jumped, but we forgot that he could hang in the air longer than us. So when he went up his tongue was out, he looked down as we went down and decided at the same time to switch the ball to the left hand, the tongue went to the left side too then spun it against the glass and thru. I looked at Michael Cooper and said so we asked him to do it again? Greatest shot I’ve ever seen in my life. So when I think about the greatest loss, you know losing to Michael [Jordan] and the [Chicago] Bulls then the other one was when we lost to the [Boston] Celtics because I really hated them.”

It’s pretty incredible to think that Magic describes Jordan’s shot as the greatest he’s ever seen. Don’t get me wrong, none of us are going out to the hardwood on the biggest stage in basketball and pulling it off as smoothly (if at all), but is it really the best? That’s a little bit debatable. Still, the midair, switch-of-the-hands shot will forever go down in infamy as being Jordan’s defining moment in his first NBA Finals.

Magic also gave some insight into Jordan’s famous shrug the following year in the 1992 NBA Finals against the Portland Trail Blazers, which is just as classic when it comes to MJ stories. Bottom line: Michael Jordan will forever be known as the baddest motherfucker on a basketball court. Period.