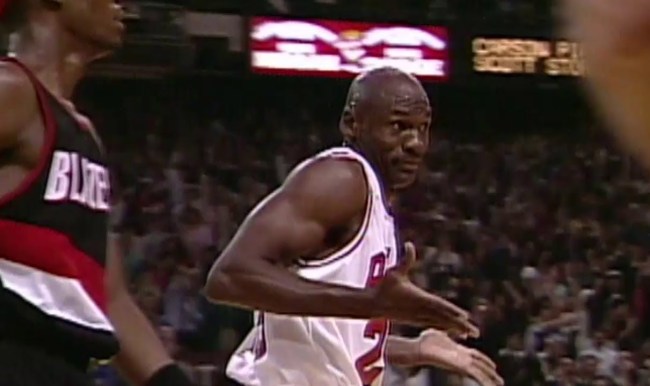 If you follow the NBA at all then you are all too familiar with Michael Jordan’s incredible performance during Game 1 of the 1992 NBA Finals versus the Portland Trail Blazers.

Jordan began his run towards his second NBA championship that day with a new record for most points in a first half of a playoff game with 35. Among those 35 points were six first-half three-pointers.

After hitting his sixth three of the half, Jordan turned towards the broadcasting table and gave them a shrug as if to say, “What are you gonna do?”

This week, 28 years later, Magic Johnson revealed his version of why His Airness went off in that first half and the real reason behind Jordan’s now iconic shrug.

I say, his version, because a different story has already been reported, and we all know that Magic would never stretch the truth or make a story that centers on someone else be about him instead, right?

“The night before he hit all them threes against Portland, we’re playing bid whist at his house. His dad and I, we bust him up, we tore him up, and I’m running six nose and five specials on Michael, right?” Johnson begins the tale.

“So we play and I said, ‘Michael I gotta go home, you’ve got a game. ‘Cause remember I was working for NBC at the time. So I’m calling the game. He said, ‘No MJ’ because Mike was so competitive. When he loses, he don’t want you to leave, you know?

“So, remember he shot and made like four or five in a row and remember when he made that last one and he turned to the scorer’s table, he was turning to me! He was so hot that night, so he owed me a lot because I’m the one he was mad at. That’s why he took it out on Clyde Drexler the next day in the game.”

Lakers legend Magic Johnson just told me Michael Jordan’s shrugging his shoulders when he drained 6 3’s against the Blazers was because Magic beat him in a card game the night before. pic.twitter.com/6JLPDI97MD

Now, that could be 100 percent true. However, in David Halberstam’s excellent book, Playing for Keeps: Michael Jordan and the World He Made, Jordan’s motivation to dominate in that game was because of the comparisons the media was trying to hype up between him and Clyde Drexler looking for another Magic vs. Bird type of scenario.

“He set out to do nothing less than destroy, not just Portland, but Drexler as well,” wrote Halberstam.

It was like “an assassin who comes to kill you then cut your heart out,” said Danny Ainge, Drexler’s teammate at the time.

Which version is the truth? It’s probably a little of both, but knowing MJ it was more because of Drexler than it was Magic.