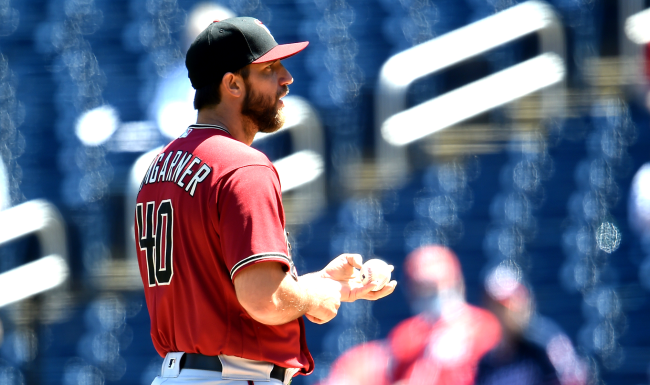 On March 10, 2022, it was reported that in addition to Major League Baseball thankfully going back to nine inning doubleheaders the league was also doing away with the abomination that was the extra inning rules of the past two seasons.

In case you’ve been living under a rock, here’s what was changed. Over the past two seasons, MLB made doubleheaders seven inning affairs. This caused an issue last season when Madison Bumgarner (who once dated a girl named Madison Bumgarner) threw a no-hitter against the Atlanta Braves only it wasn’t counted as a no-hitter because it didn’t occur in a nine inning game.

However, if Bumgarner had thrown this seven inning no-hitter prior to the 1991 season it would have been counted as a no-hitter.

Confused? You should be.

Due to the shortened 2020 season, Major League Baseball that year also implemented a rule that all extra inning games would see a runner placed on second to begin any innings after the ninth… like they do in little leagues.

This was widely reported to be going away because, well, it was really stupid.

Man on 2nd was the worst rule in all of sports. Thank GOD https://t.co/T878qslZPV

Unfortunately, the celebrations of the elimination of this rule we now know were premature, because, guess what? It’s back.

• 28-man rosters until May 1
• "ghost runner" in extra innings (only for 2022)
• "Ohtani rule" – pitcher can remain DH after he’s pulled from the mound pic.twitter.com/hb2nRL6pNd

The rule, according to the New York Post, is supposedly only going to be in effect for one more year then go away in 2023. Why it won’t go away now is a mystery.

The extra-innings rule is probably the most controversial of the batch. It will just be in effect for 2022. It will again have a runner placed on second base to begin each extra inning as a way to create instant action and strategy and get to a resolution without playing deep into extra innings.

Fans and some players, including the aforementioned Madison Bumgarner, were not happy to hear this news. (Although it was actually the players union that lobbied hard for the rule to return.)

“I don’t know, I’m sure we’ll have a different rule in three months, maybe the next year after that,” said Bumgarner, who pitches for the Arizona Diamondbacks. “We’ll just make it up as we go. We’ll see whatever they like, the flavor of the week. … Maybe we’ll start playing with a wiffle ball or something.”

Union and players have no sense for the great history of this game. If soccer was as reactionary they'd have been using their hands by now and having two point goals for long shots

What happened to playing games until an actual winner is decided? First it was the NHL with the stupid shoot-out, then the NFL with their “possession” rule and now this abomination. 🤦🏻

Ok, you got the universal DH. It hurts, but it's not a betrayal of baseball. The "ghost runner" rule is a fundamental change that doesn't even do what it's supposed to do. Please hear the fans on this one @MLB

Bumgarner’s manager on the Diamondback, however, loooves the extra innings rule.

“I enjoyed the ghost runner over the last couple of years, I really have,” said Arizona manager Torey Lovullo. “It added a certain degree of excitement to the game. It sped up the game. It enabled us to preserve some pitching, and not having to send out guys for the next day because we’re tapped out.”

Saving arms and saving guys for the next day? Why just not end the game after nine innings if you wanna go home that badly

For the love of god can we stop calling the extra inning runner on 2nd a “Ghost runner”?!

He’s not a ghost! We can see him! A ghost runner is what you call a runner on base in whiffle ball when you don’t have enough people.