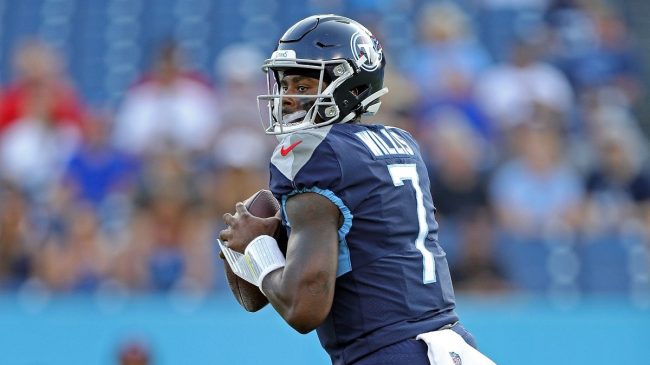 Tennessee Titans fans were hyped after seeing Malik Willis win the backup quarterback job. The kid has a lot of work to do before becoming a starter in this league, but this is a great first step in his career. Now, the rookie quarterback reacts to winning the role and it will have Titans fans oozing with excitement for future seasons.

During an interview with Jim Wyatt, Malik Willis opened up about winning the backup job in Tennessee. After a rather strong showing throughout the preseason, the Titans had no choice but to award him the backup position. Even so, Willis is hungry for more and is focused on working until his goals are achieved. He opens up on where his head is at entering the 2022 season.

“Thought process hasn’t changed. It’s about going in and trying to work every day, still being that sponge, learning from both Ryan and Logan, and just understanding that the job isn’t finished, it’s just beginning.”

What’s In Store For Malik Willis And The Titans?

The ideal situation for Malik Willis is to not see the field at all this year. He needs time to develop his game and Titans fans should expect to see Ryan Tannehill all season long. However, considering Willis is the backup, he must be ready to sub in at a moment’s notice. For that reason, the rookie quarterback is keeping his mind sharp.

“There’s no way for me to look at it like, ‘OK, I don’t feel like I’m going to be playing now because preseason is over with so I don’t have to go as hard at practice, I don’t have to keep trying to progress.’ I have to truly continue that mindset of trying to get better every day and soaking up any information I can, on and off the field. Soaking up any different types of interactions with my teammates that may help me in the future and just understanding what comes with it.”

This is exactly what Titans fans want to hear from their exciting prospect quarterback. We’ll see how his career pans out, but for now, Malik Willis is in a prime situation moving forward.