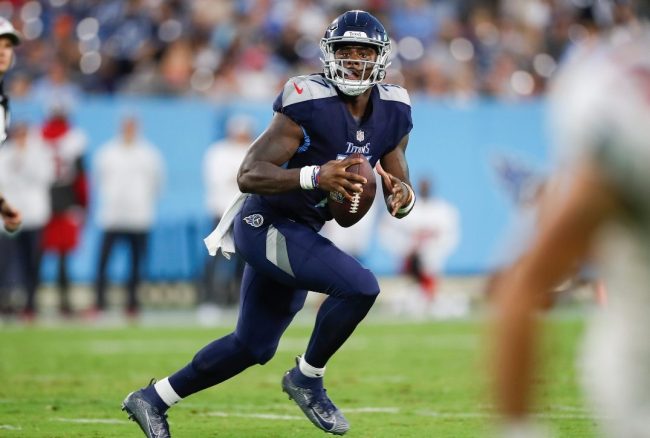 The Tennessee Titans are two-thirds of the way through the preseason after defeating the Tampa Bay Buccaneers on Saturday. There have been some positives and negatives about the roster with the new season approaching. However, Titans fans cannot stop buzzing about Malik Willis, especially after the prospect quarterback made an MVP-caliber play.

James Foster shares an end zone angle of a brilliant play made by Malik Willis. He breaks a tackle, escapes the pocket, then delivers a unique sidearm throw that was right on target. The wide receiver, Dez Fitzpatrick made a great heads-up play to reel in the catch as well. At the end of the day though, all eyes are on Willis right now, as the Titans’ young quarterback has the fan base losing their minds.

Ryan Tannehill has done a decent job since taking over as the starting quarterback in 2018. He’s helped the Titans make the playoffs time and time again, however, it hasn’t resulted in a Super Bowl title. The fanbase is hungry for a championship and many are drooling over Malik Willis right now, despite the fact he’s not likely to play at all in the 2022 season.

Man. If Willis gets to where he can succeed play in, play out in the structure of the offense, his ability to create makes him so electric.

The ability to put that much zip on the ball from that angle is something that you just can’t teach https://t.co/4XrXLA93xW

a lot of people commenting on the sidearm throw, but Willis avoiding pressure & a potential sack there is fantastic

We’ll see how much time the Titans give Malik Willis in their final preseason game. Clearly, fans are eager to see him under center, but the young quarterback needs time to develop. The best case scenario is for Willis to spend a year on the sideline and potentially take over the starting job next year.