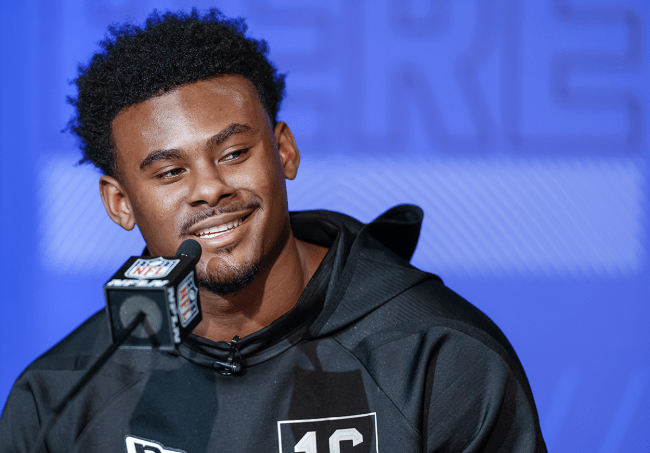 One of the biggest storylines of the NFL Draft was Malik Willis’ slide into the third round. After being hyped into a first round prospect (even though the tape wasn’t there), the former Auburn and Liberty quarterback was selected with the No. 86 overall pick by the Tennessee Titans.

Shortly after the draft concluded, current Titans quarterback Ryan Tannehill made a comment that sent shockwaves across the football world. He said that he did not think it was his job to mentor Willis.

On Friday afternoon, the Titans opened up the first day of rookie minicamp. Willis, of course, was in attendance.

Here is your Malik Willis video, you vultures #Titans pic.twitter.com/FkiL5D4kQL

During the afternoon, Willis was looked like he is ready to learn, grow and develop. He was open to criticism, open to new perspectives and stayed very positive with his play.

QB Malik Willis on the field just seemed like he’s ready to work, asking lots of questions… of the field he’s so poised, gives off an positive vibe. #Titans pic.twitter.com/jYAGRVCIco

Once the day came to a close, head coach Mike Vrabel was asked about what Tannehill said about Willis. He didn’t have much to say on the matter and thought that everything was overblown.

And then it was Willis’ turn to take the podium.

Malik Willis is all smiles. Said it’s like the first day of school and he thought day 1 went well. #Titans pic.twitter.com/FKLbBSgnES

Of course, he too was asked about what Tannehill said. Except he didn’t know what the reporters were talking about. Not really, but he played it off that way and it was hilarious.

Willis made it very clear that there was nothing to it. He said that Tannehill had him over to hang out and that everything is cool.

.@malikwillis said @ryantannehill1 invited him and the @Titans rookies over to his house. Said they chopped it up. Called him a “good dude.” pic.twitter.com/2xrfy65eZI

That narrative can officially be put to bed. There is no bad blood in Nashville, even as Willis hopes to eventually play himself into a starting role.