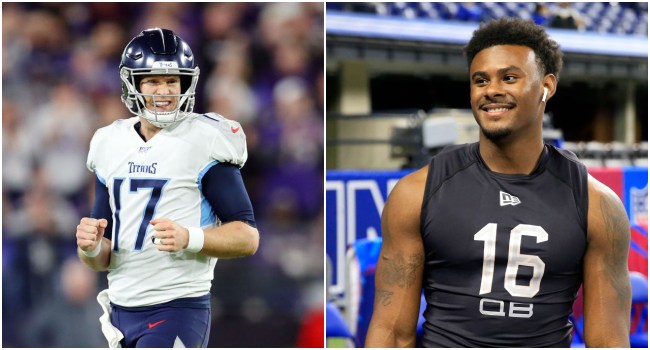 I cannot pretend to have the mindset of an elite athlete as I, quite clearly, am not one. I maybe could’ve played college soccer but I unfortunately assigned myself the role of team clown until it was far too late. Now, here I am writing about sports instead of playing them. Karma, I believe they call it.

Speaking of karma, enter Tennessee Titans quarterback Ryan Tannehill, who has found himself in the crosshairs of public opinion due to his recent comments about it “not being his job” to mentor rookie quarterback Malik Willis. The Titans drafted the 22-year-old former Liberty quarterback in the third round (86th overall pick) of the 2022 NFL Draft.

When asked about helping Willis learn his craft, Tannehill, perhaps controversially, said that it’s “not his job” to mentor the young signal-caller.

“I don’t think it’s my job to mentor him,” Tannehill said. “But if he learns from me along the way, that’s a great thing.”

Following Tannehill’s comments, the NFL world seemed to be pretty divided on his opinion as some people believe a good leader should help his teammates, while others agree that his job is to play quarterback and win games for the Titans:

Pretty disappointing take from Ryan Tannehill on not wanting to mentor Malik Willis. I get you don’t want to lose your job to a rookie, and that’s a good thing.

But, Malik’s also your teammate now. Helping advance the game by teaching the younger generation is also a good thing! pic.twitter.com/ISQKJ1swQu

The Titans will need someone to mentor Malik Willis through his development.

I see Ryan Tannehill is on his “Not my job to mentor” energy. It’s not, but man it makes you a good teammate. You can win without your QB being a good teammate but better for the team if he is. What a leader! Guess the Steelers’ DBs had it all wrong taking time w/ rookies & 💩

Ryan Tannehill put himself in a bad spot with his comments. He didn't have to play that card. Now, after that playoff performance, he has to play well or those fans will turn on him quick.

It wasn’t Alex Smith’s “Job” to mentor Patrick Mahomes in 2017. But he did because Alex Smith is a great teammate and an even better man. Patrick himself praises Alex for showing him the ropes during his rookie season. Maybe Ryan Tannehill should take notes.

The second part of Tannehill’s quote is “but if he learns from me along the way then that’s a great thing”.

Ryan is a good teammate and this isn’t his first rodeo. He’ll do right by Malik. https://t.co/DCyei1GLMt

This what yall fake mad about today? 😂

Tannehill is 100% right here. He has ONE job. Be the starting QB for the Titans. If he chooses to mentor Malik Willis along the way that’s good on him; but by no means an obligation. 🤷🏿‍♂️ https://t.co/4vPMqxJTsI

It’s not what you say but how you say it. Ryan Tannehill wasn’t wrong.

What did you think Tannehill was gonna say? He's being paid to be QB1, and should have the mindset of one. He's 33, not 37-38 on his way out. It's his job to lose not just hand it over. #Titans front office didn't really think this through.. pic.twitter.com/5PxlInJ0vn

What y’all mad at Tannehill for? Willis better keep up wit the clipboard and footnotes, gotta show out when he gets an opportunity

During his career as the Titans’ starting QB, Tannehill has posted a regular-season record of 30-12, while passing for 76 passing touchdowns and 27 interceptions, and running for another 18 touchdowns. The former Texas A&M product has a 2-3 record in the postseason with Tennessee, though.