Tiger Woods Shanks A Birdie Putt After Some Idiot Yelled In His Backswing, Fans Heckle The Dude 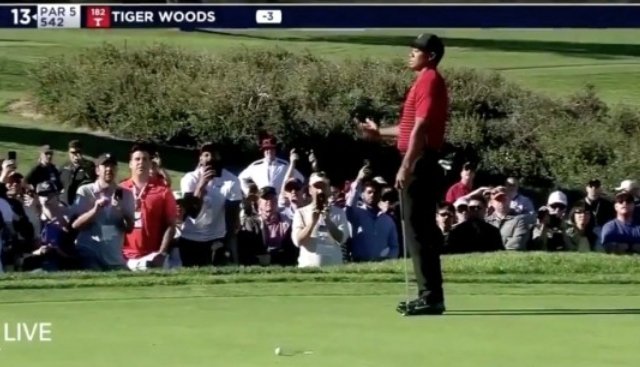 When a man reaches the age of 35, all his interests and hobbies become secondary to respecting the rules of golf. If you’ve ever picked up an old-timer on the links to round out a foursome, you know exactly what I mean. That dude would rather drive his cart over veterans’ graves than come within 100 yards of the green. The guy spends more time raking the sand on 17 than he does raking his kids’ sandbox. I don’t know why all men eventually transition into golf fundamentalists, but I am certainly not there yet–the only reason I hit the links is to drink myself blind, work on my tan, and try to drill the slow foursome ahead of me. I’ll grow up one day.

At the Farmers Insurance Open on Sunday, the crowd was filled with men in visors escaping their wives for an afternoon to bow down to the golf gods. So you can imagine how the peanut gallery reacted when one guy screamed “Get in the hole!” after Tiger Woods’ birdie shot on 15. Tiger pinned his third shot five feet from the cup and during his relatively easy birdie putt, some boner screamed in his back swing, causing Tiger to push the putt right of the cup.

After the shot, the entire gallery of spectators pointed out the culprit to a course official. The official essentially told the dude to shut his mouth over calls from the crowd to kick him out.

Moral of the story: respect the rules or deal with the wrath of old-timers with an axe to grind.