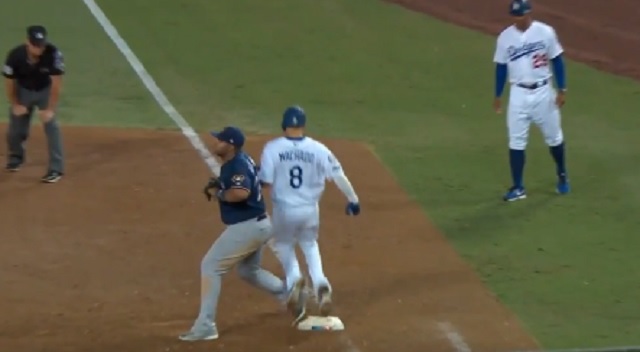 Manny Machado seems to be getting on everyone’s last nerve this posteason.

Before today’s playoff game vs the Brewers, Machado pissed off Dodgers fans when he went out of his way to say that he wasn’t interested in “hustling” on plays during the playoffs because that wasn’t his “cup of tea”.

“Obviously I’m not going to change, I’m not the type of player that’s going to be ‘Johnny Hustle,’ and run down the line and slide to first base and … you know, whatever can happen. That’s just not my personality, that’s not my cup of tea, that’s not who I am.”

During tonight’s game 4 of the NLCS, Machado found himself in the middle of more controversy when it appeared that he deliberately kicked Brewers first baseman Jesus Aguilar in the leg.

Machado with the most blatant dirty play I’ve ever seen. Such a joke pic.twitter.com/3iaGKhB9gC

All you need to know about this dude. pic.twitter.com/UQB3YGwjmP

That is exactly why people think what they do about Machado.

Machado is a typical Dodger, he is a rude asshole. Go Brewers! Let's have a Red Sox/Brewers World Series.

Manny Machado just passed Tom Brady on the list of pro athletes I want to punch in the face.

Can someone say it?
That's some total BS..
Embarrassing…#Machado

Dirty play by a dirty crybaby player. Dude should get suspended but won’t. No place for that crap in the game. Grow tfu Machado.

Machado is a great player but that was as dirty as it gets at 1B. No way to sugar coat that kind of crap.

This series has really made me hate Machado. Dirty ass play what a clown #NLCS