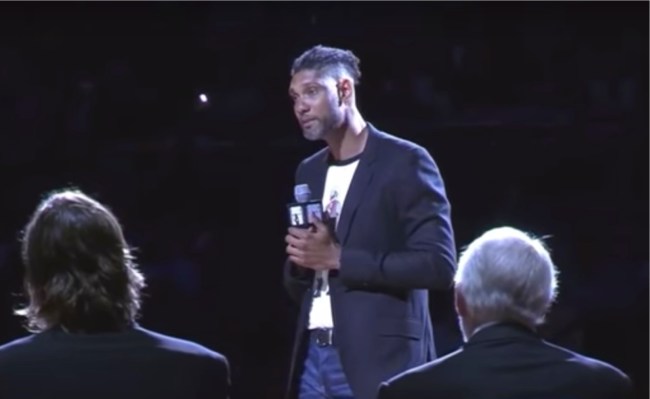 Manu Ginobili had his number retired by the San Antonio Spurs last night in a pretty cool ceremony. Hell, the four-time NBA champ was so beloved for his grit and style of play that the team even put tissues in the cup holders of their arena to help any Spurs fans who may have found themselves getting a little teary-eyed during the halftime celebration.

Among those who joined Manu Ginobili at center court for his jersey being raised to the rafters were former teammates like Tim Duncan, Tony Parker and Bruce Bowen, along with current San Antonio Spurs head coach Greg Popovich, who each gave some funny story about Ginobili to honor the Argentine baller. But it was Duncan’s — who’s now sporting short dreads, by the way — that really stole the show.

Recapping the day the Spurs drafted Manu Ginobili with the No. 57 pick in the 1999 NBA Draft, Duncan talked about how he never actually watched the draft, but, instead, would just receive updates from Popovich about which players the team selected. And, needless to say, Popovich may have liked Manu’s game coming out of Argentina when they drafted him, but he had no F’in clue how to say the dude’s name. Just listen to how Duncan describes the interaction with Popvoich over the phone that night.

Tim Duncan's story from when Manu got drafted is comedy 🤣 pic.twitter.com/IujAr7FkAq

The story’s pretty entertaining in its own right, but then you go back to check the tape of the 1999 NBA Draft when Rod Thorne made the announcement that the Spurs selected Manu Ginobili and, well, it’s obvious why Greg Popovich said what he did. But, c’mon, you’d think that the head coach would at least know that Thorne was the one who butchered it and he’d know for himself it was wrong, right?

Considering Manu Ginobili ended up being a two-time All-Star, helping spread the game of basketball internationally, was one of the main stars on four NBA championship teams and innovated the sport with some of his slick skills, the fact that the Spurs snagged him with the 57th overall pick is insane. And it’s even more amazing that Ginobili joins a list of just eight other San Antonio Spurs players who have their numbers hanging in the rafters, so solid pick by them — even if the head coach had no clue who the hell they were even picking back then.