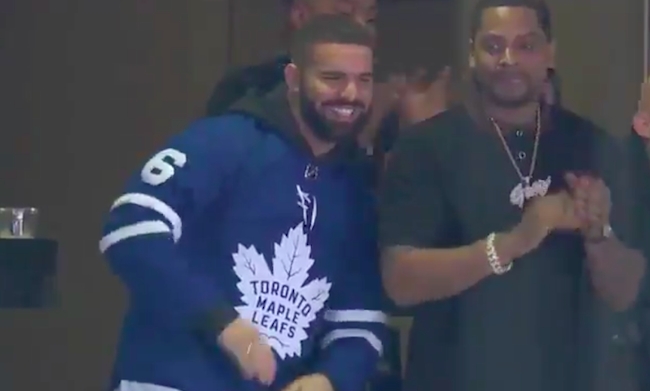 On Wednesday night, the Bruins took on the Maple Leafs in a Stanley Cup Playoff matchup in Toronto and walked away with a 6-4 win to even up the series in what turned out to be an absolute rollercoaster of a game.

Boston came out of the gate hot and put up two quick goals before seemingly forgetting how to play hockey, and while they managed to score three unanswered points after Toronto evened things up in the second period, the Leafs staged a late-game rally that caused plenty of buttholes—including mine—to clench hard enough to form a diamond.

While the Bruins led for most of the game, the ice seemed like it was tilted in Toronto’s favor for the majority of the sixty minutes and I would not have been in the least bit shocked if the Leafs had managed to pull off the comeback.

Thankfully, Boston had a secret weapon in their corner: Drake.

The noted bandwagon-jumper showed up to last night’s matchup rocking a blue and white sweater and all but guaranteed Toronto would take the L thanks to the well-documented “Drake Curse” that has haunted seemingly every team the rapper has rooted for.

The drake curse is real. Yo drake, you should wear some LA rams gear this week. Just sayin’ #CowboysNation #Drakecurse #CollegeFootballChampionship pic.twitter.com/HGXcD8ezSS

Alabama fans were quick to blame Drake for their blowout loss to Clemson in this year’s national championship game and plenty of people pointed the blame at him for cursing the Leafs last night.

Drake is the antithesis of Lil B

Kick Drake out. Right now. The man is cursed.

Drake: Excited to show off my Leafs jersey at the game tonight

This isn’t the only time the Drake Curse has struck recently. Earlier this week, Manchester City supported blamed him for a loss against Tottenham after he snapped some pictures with members of the squad.

Additionally, Roma jokingly banned players from taking pictures with Drake after he posed for a photo with Paris Saint-Germain’s Layvin Kurzawa ahead of their blowout loss to Lille.

As a Bruins fan, I would like to extend an invite to Drake to come to the Garden for the next couple of games. We’d love to have you.