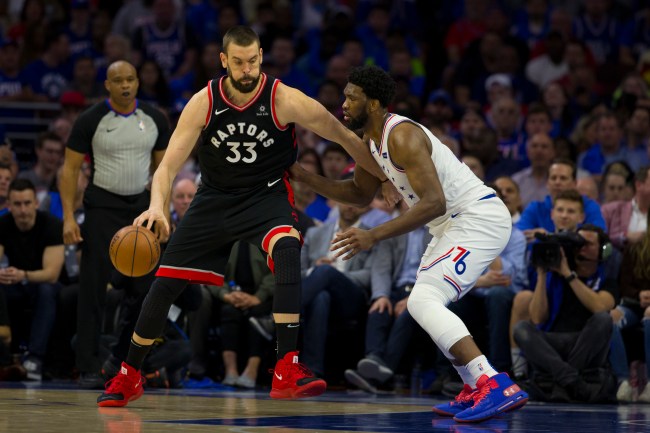 Marc Gasol and his Toronto Raptors teammates celebrated one of the most incredible finishes to an NBA Playoffs series the other day, sending the Philadelphia 76ers home, literally, crying, which fans saw on TV while Sixers big man Joel Embiid walked to the locker room. When Kawhi Leonard’s remarkable buzzer-beater dropped in after bouncing on the rim not one, not two, not three but four times, the entire city of Toronto went apeshit, and it left Philly fans stunned.

Although there are some (crazy) people out there who think that Leonard’s shot going in was nothing but a big conspiracy, Marc Gasol and the Raptors aren’t letting anyone rain on their parade, instead looking forward to an Eastern Conference Finals matchup with the Milwaukee Bucks. But before Game 1 tips off tonight, Gasol was asked about the ending of the previous series against the Sixers, more specifically, what he said to Joel Embiid prior to the Philly big man walking off the court, as Gasol was the first to console Embiid after Leonard’s incredible shot.

Marc Gasol was the first to go hug a crying Joel Embiid after the game. The world doesn’t deserve this man. pic.twitter.com/RkZoUK4Ir4

To use a simple word to describe Gasol’s encouraging words: classy. Just take a listen to how Marc Gasol described what he told Embiid, with the Toronto center saying why it was important for him to relay the message.

This is an awesome gesture by Marc Gasol, who, for all intents and purposes, had no reason to actually say anything at all to Joel Embiid. Given the amount of criticism that Embiid has gotten over the past few years as the Sixers have become better and perennial playoff contenders, the 25-year-old can use some wisdom from a veteran like Gasol, who has been around the block for a long time and has seen a lot during his NBA days.

While Embiid clearly took the Game 7 loss in Toronto harder than most of his other teammates, he’s getting a lot of support from other people. Whether it was Gasol reminding him to keep his head up, or the 9-year-old fan who wrote him a note of encouragement, here’s to hoping the big man takes it to heart and uses it all as motivation to get better heading into next season.