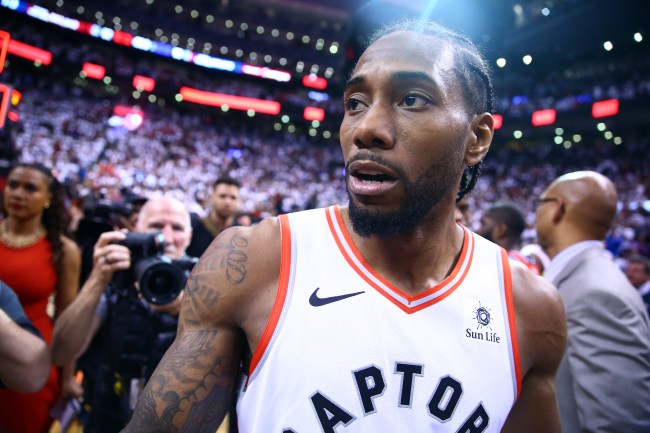 Kawhi Leonard has been playing out of his damn mind these NBA Playoffs. While he’s in the final year of his deal and will become one of the hottest free agents on the market this offseason — and is tied to teams like the Los Angeles Clippers or Los Angeles Lakers, among others — if this is the only season playing north of the boarder, the All-Star sure is making the most of his time with the Toronto Raptors.

Guiding the Raps to the Eastern Conference Finals by closing out the second-round series with the Philadelphia 76ers by hitting an epic buzzer-beater, Kawhi Leonard might just be proving that he’s the best basketball player on the planet right now. I mean, c’mon, how many people could even hit rim on this shot, let alone bury it during a pressure-packed moment with time running down; it’s incredible.

While everyone’s still blown away with Kawhi Leonard’s game-winner from the other day, a few (crazy) Internet people are here to rain on the parade because, well, some people are miserable. That’s because commenters from places like Reddit and YouTube are literally trying to come up with F’ed up conspiracy theories about Leonard’s shot, with some people even thinking that the ball had a magnet in it. No, seriously, take a look at this sh*t — which was shared on Twitter by Bleacher Report’s Tyler Conway.

There are people on YouTube truthering the Kawhi shot saying it was a magnetic rim 😂😂😂 pic.twitter.com/p3UKoK4xN8

Uh, WTF are some people drinking? Sure, I get the fact that the ball bounced four times and, somehow, miraculously fell through the net for the game-winner, but these conspiracy theories are wilder than Philly fans blaming Kendall Jenner for the Sixers losing to the Raptors.

Anyway, here’s to hoping these people find a new hobby in their lives, because if they really, truly, undeniably believe that Kawhi Leonard’s game-winner was either impacted by magnets and/or was due to a heavier weighted ball, well, they really have a pessimistic view on the good things in life. Keep on Internettin’, Internet.