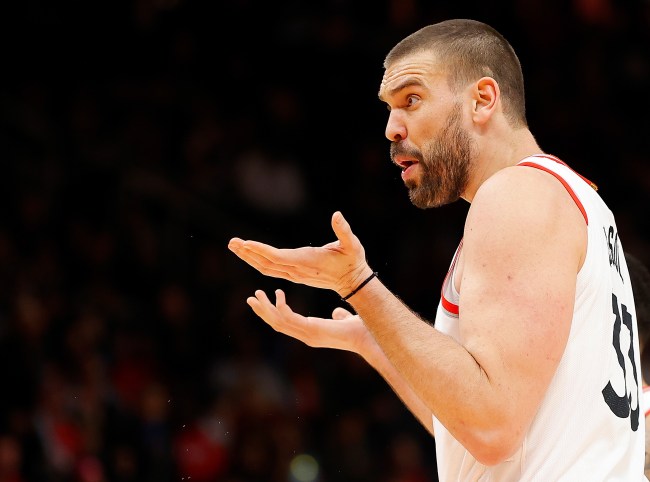 When most people think of Marc Gasol, they probably imagine a big man with a bit of a dad bod who has a soft touch from the outside and a bullish defensive mindset. Hey, those traits aren’t a knock on the seven-foot Spaniard, as they’ve been part of what has helped him earn three All-Star appearances and a Defensive Player of the Year Award (2013).

But, like other athletes who have been stuck in quarantine like everyone else has over the past four months, Marc Gasol might not look like you remember; because the Toronto Raptors center went through an insane body transformation that makes him look mega different. Just take a look at the photo below to see Gasol’s new, slimmed down look.

This whole body transformation thing seems to be a serious trend for current athletes these days, with guys like James Harden of the Rockets and Nikola Jokic of the Nuggets looking skinny AF as they re-emerged from quarantine. Seriously, what the hell have these guys been doing when not playing basketball? Based off some of the pics, not eating.

After the pics of Marc Gasol made the rounds on Twitter, people had all sorts of reactions, so take a look at what some were saying about the slimmer Spaniard.

Amazing what a contract year does for ones fitness.

Skinny Nikola Jokic is for boys,
skinny Marc Gasol is for men#NbaTipo pic.twitter.com/JSbwelO5BK

Gasol is listed on the Raptors site at 255 pounds, but given his recent weight loss, he’s got to be more around 235 or so, right? Seriously, the dude has lost all that flabbiness and looks like a marathon runner who’s about to pound the pavement for 26.2 miles.

Speaking of marathons, take a look at the latest episode of the We Run This podcast, where my cohost, Chris Illuminati, and I discuss the popular virtual marathons trend, and if they’re legit or not. Seeing Marc Gasol’s new physique, maybe he’s been taking part in one and that’s how he’s dropped all the weight?