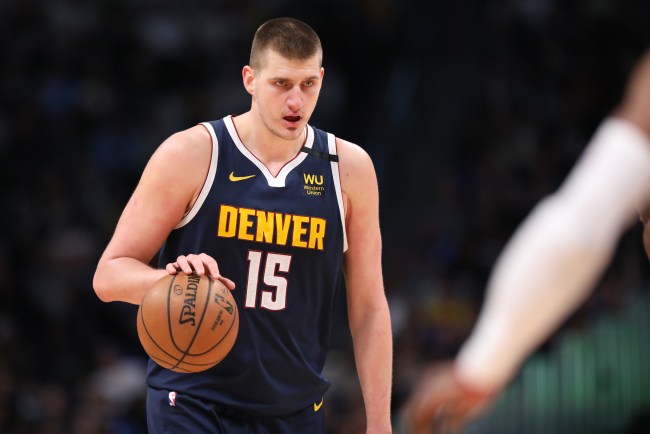 There’s no denying that Nikola Jokic of the Denver Nuggets is easily one of the top 25 current NBA players, with the two-time All-Star capable of doing pretty much anything he wants to on the hardwood. While the Serbian center stands seven-feet tall, he’s proven to be versatile AF, and can score in the post or from behind the arc, rebound like a beast and, just for good measure, handle the rock and pass it like a point guard. It’s why Jokic is third in the league with 12 triple doubles thus far this NBA season and an absolute nightmare for opposing coaches.

But here’s the thing about Jokic: He doesn’t necessarily look like he’s good at basketball. That’s because he’s a little bit flabby. He isn’t very toned. He literally lacks any definition of muscle whatsoever. In other words, he’s always seemed to have a dad bod.

Well, it looks like those days are over for Nikola Jokic, because, based off of a recent photo, the Nuggets’ big man is slim AF and has lost a ton of weight as he’s been preparing for the NBA season to return — which could be sometime in the next couple of months. Take a look below at how Nikola is looking these days.

Nikola Jokic has lost some lbs during this quarantine. pic.twitter.com/foQvlH1pTl

Yep, it sure seems like Nikola Jokic has really lost some weight, guys, and has definitely lost that dad bod he was rocking. This is something we recently saw with James Harden, too, so it’ll be interesting to see if it impacts their game once they return to action for a playoff run.

According to Jokic’s head coach, Mike Malone, the big fella’s body transformation started right around the time the NBA season was postponed in mid-March, and has continued since then. Malone even suspects Nikola has lost anywhere between 25-30 pounds, which he talked to Andrew Joe Potter of The Score about.

“I know our guys have been working. Seeing Nikola (Jokic), seeing Jamal (Murray) – these guys have been so committed, so focused, so disciplined in terms of keeping their bodies in shape.”

“I mean, Nikola, before the season was suspended on March 12, had lost close to – I don’t know – 25, 30 pounds maybe,” Malone added. “He was just in phenomenal shape. And he’s maintained that, if not improved it.

“So if there are reports out there of a 6-foot-11 lean, mean fighting machine Serbian walking around, I believe it because I’ve seen it.”

Some people gain weight, like you and me, and others lose weight and get into great shape, like Nikola Jokic. Hey, all that quarantine eating was well worth it.