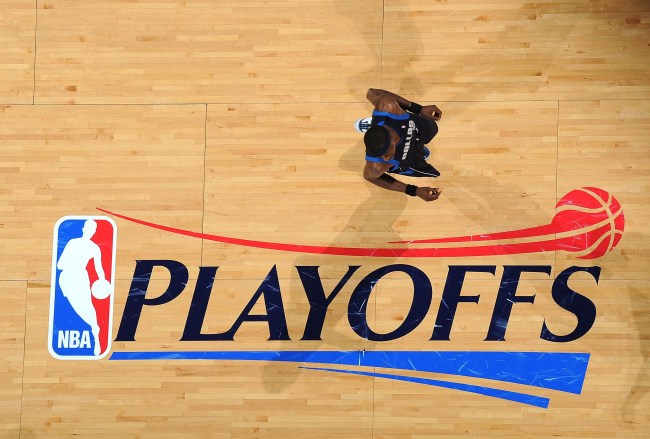 The NBA Playoffs may finally be coming back, with the league set to propose a new plan on Thursday that outlines an idea that could lead teams to Orlando to resume the season and play things out from July 31 to as late as October 12. While there’s no guarantee that the proposal will absolutely pass, there’s a lot of optimism that the players and owners can agree that this is the best course of action.

As the league begins the process of (hopefully) restarting again, more and more details surface about some of the reported language in those discussions. First, we had ESPN’s Adrian Wojnarowski talking to Scott Van Pelt on SportsCenter about the amount of teams involved — which is believed to be 22, and not the full 30 — and why that number is what Commissioner Adam Silver supposedly landed on. Surprise, it’s because of money, with Woj telling SVP that the difference between 22 teams competing for a postseason berth and the usual 16 teams could be hundreds of millions of dollars worth of revenue.

Great to have @wojespn join SVP to give us some insight as a lot of people await the new format. pic.twitter.com/8gZhuzP8Ky

But which 22 teams will actually be competing for the NBA Playoffs, and how will this whole thing actually work? With 16 teams already decided because of their regular season records prior to the league being suspended, Wojnarowski gave an update Wednesday morning on the other six teams who will be invited to participate in the restart of the league, giving each of them a chance at reaching the playoffs — and it’s not an even split by conference, which is interesting.

Each of the 22 teams will play eight regular season games in Orlando for seeding purposes for the playoffs, sources tell ESPN.

Sources: Joining the 16 current playoff teams in Orlando: New Orleans, Portland, Phoenix, Sacramento and San Antonio in the West and Washington in the East. If the 9th seed is more than 4 games behind the 8th, No. 8 makes playoffs; Fewer than 4 games, a play-in tournament.

So the NBA's inviting 22 teams to Orlando: 13 Western Conference, 9 Eastern Conference. Eight-regular season games per team. Play-in for the 8th seeds. July 31-October 12. Vote tomorrow to ratify.
The NBA's back.

There were a lot of whispers about the league hoping to get this year’s No. 1 overall pick, Zion Williamson, and his New Orleans Pelicans into the mix. Whether that was true or not, it happened, with the Pels joining five other teams for a chance at the NBA Playoffs this season — which is something all basketball fans are probably happy to see.

Again, these are just reports at this point, but, c’mon, who does it better than Woj does when it comes to details of the NBA? Nobody. That’s why we should all be hopeful that this is true, the proposal will pass, and the league will come back with a unique format that fans have never seen before. Let’s go!