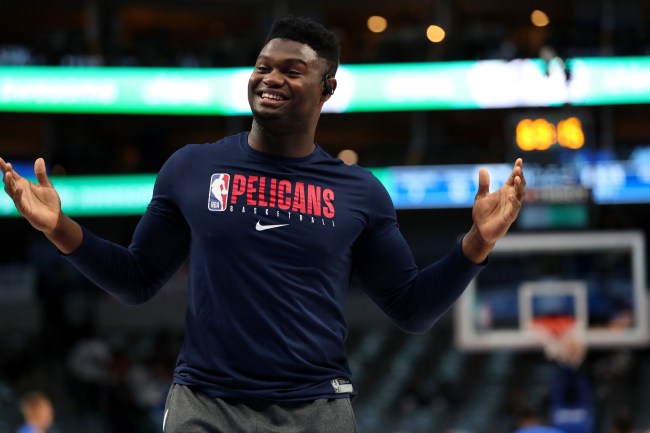 As soon as Zion Williamson announced that he was entering the NBA after a star-studded freshman season at Duke, the hype machine was in full force. Not since LeBron James had the league seen such a prolific (and polarizing) rookie, with many dubbing the 2019 No. 1 overall pick as the next great superstar.

Unfortunately, following minimal Summer League action, Zion got hurt, missed the first few months of the season, led some to debate whether he should even risk playing or sitting out his entire first season, and then, after deciding to return, lived up to the early expectations in historical fashion. Point blank: If Zion Williamson can do what he’s done in a short amount of regular season action, he’s bound to be the star everyone expects.

But could that stardom come sooner than expected? Although the teenager himself said his mindset entering this season was to compete for a championship, his team, the New Orleans Pelicans, are far from being a legit title contender. However, because of the ongoing pandemic — and suspension of the NBA season — the league could find a way to get Zion and his squad into a condensed playoff.

With rumors flying that the league may incorporate some sort of group play idea for the top-20 teams in the league — similar to how the World Cup Group Stage is — some wonder if the NBA’s sole purpose of doing so is to include Zion Williamson. That’s according to ESPN’s Brian Windhorst, who elaborated on what he’s heard from some people in response to the NBA’s idea.

The NBA has discussed a scenario where the top-20 teams in the entire league regardless of conference play in a Group Stage style first round. The Pelicans would be included in this scenario.

“Let me just say how do you get to 20 though?” said Brian Windhorst. “Because if you just go by the straight records, because to me, this is what I’ve already heard, alright. I’ve already heard people in this league say this is an elaborate game to get Zion Williamson into this bubble.”

Williamson missed the first part of the season and has been a boon for the Pelicans on the court and for the NBA in terms of ratings.

“I’ll tell you one thing: that scenario gets Zion Williamson in,” added Windhorst. “Look, I’ve just heard… I’m not saying the NBA is going this route, I’m just saying I’ve already heard this scenario that no matter what happens, the cutoff line will be the Pelicans. They’ll be in. It will be the first time in the history of the NBA that the league kicked the ball into the fairway for New Orleans.”

Who knows if Windhorst’s statement has any validity to it or not, but considering Zion Williamson is one of the biggest young stars in the game, it makes sense that the league would want him part of the playoffs if they can control the participating teams. Regardless of what happens and which teams do actually get in, sports fans just want games to return ASAP — so we’ll take whatever we can get at this point.