Zion Williamson Admits He Really Wanted To Return To Duke, But Mike Krzyzewski Wouldn’t Let Him 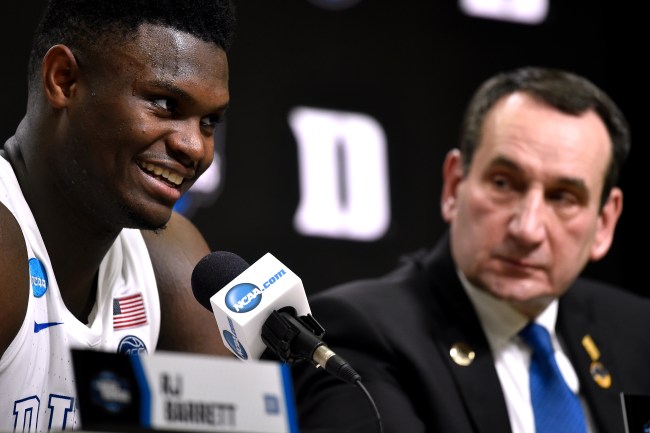 Zion Williamson was the most dominant college basketball player on the planet last season, with the Duke freshman taking over headlines and making NBA teams salivate about the prospect of landing the No. 1 overall pick to select him. After averaging 22.6 points, 8.9 rebounds, 2.1 assists and 1.8 blocks in 33 games for the Dukies, Zion walked away with a slew of offseason awards, solidifying his place in college hoops lore forever.

A walking highlight reel with his on-court ferocity and freakish athleticism, Zion Williamson helped guide a young Blue Devils team to the Elite Eight, ultimately losing to the Michigan State Spartans in heartbreaking fashion. And, whether it was unfinished business after a disappointing end to his collegiate career or otherwise, Zion admitted that he’s sort of missing those irreplaceable college days.

While talking to current New Orleans Pelicans teammate — and fellow Dukie — JJ Redick, Williamson admitted that he loved his time in Durham, and that he was seriously considering a return for his sophomore season. Only problem? Blue Devils head coach Mike Krzyzewski refused to let hime comeback, influencing him to take his talents to the NBA after a wild freshman season that saw Zion injure his knee; which forced him to miss significant time during the regular season.

Even after Coach K’s endorsement for the NBA, Zion Williamson said he still considered removing his name from the 2019 NBA Draft for a return to Duke, but, ultimately, decided against it for his family. Here’s what the Pelicans rookie had to say during the revealing interview.

“Me, I wanted to go back. Nobody ever believes me and they think I’m just saying that, but no, I genuinely wanted to go back,” he said. “I felt like the NBA wasn’t going anywhere. The money thing, that’s money, I don’t play this for money, I play for the love of the game. I just loved my experience at Duke that much where I wanted to stay.”

“It was one of those situations where Coach K’s not gonna let me come back because he wants me to do what’s best for the family,” said Williamson. “My teammates are saying ‘that would be dope if you come back’ but at the same time, they’re telling me I would be leaving too much, I didn’t work this long to get to that. It was tough. At the end of the day I think it was my mom. She said she’d support me in whatever I do, so I was like ‘alright, I’m going back.’ I think her and my stepdad talked about it, and they were like, ‘you worked too hard to get to this moment. You’d feel bad if you left it.'”

Projected to be the No. 1 overall pick virtually all season long, had Zion Williamson removed himself from the 2019 NBA Draft, teams would’ve lost their minds. Seriously, no player in NBA history has gone from guaranteed millions as the head of his draft class to return to college — but Williamson had at least considered it.

Ultimately, Zion chose the millions — which included a massive shoe deal with Jordan Brand. And, while he has yet to flash his skills on an NBA court yet due to another knee injury, there’s probably little regret for the decision he made by jumping to the pros. Still, it’s crazy to think he even doubted doing so.