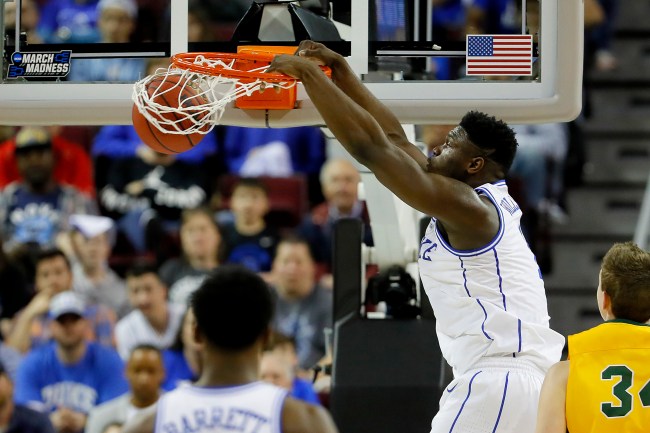 Zion Williamson is an absolute animal on the basketball court, which he proved during his entire freshman season with the Duke Blue Devils when he became the talk of college basketball with his insane play. And while Zion’s Dukies may have been eliminated in the Elite Eight of this year’s NCAA Tournament just a few days ago, the teenage phenom still seems to be putting in work.

Oh, and any pent up frustration from that loss to Michigan State the other day? Yeah, looks like Zion Williamson took it out on the poor souls who play down at Duke’s rec center — and then on an entire hoop, because he almost ripped the damn thing off the wall and ceiling with a nasty dunk that only he could throw down with such power. Seriously, take a look at how Williamson spent the days after a heartbreaking tourney loss.

Zion back at it! 😱 Please tell me that goal is still attached tho… pic.twitter.com/veMhSzMZhp

What in the hell, bros? Zion Williamson is inhuman. Not only does he throw a backboard pass to himself for a two-handed jam, but the fact that the entire basketball hoops nearly fell from the ceiling and wall is just scary. It’s like a f*cking earthquake came through the basketball court and it came in the form of a 6’7″, 285-pound beast.

By the way, could you imagine being one of those Duke students who played a pickup game against Zion? I’d imagine it’d like the scene in The Mighty Ducks when Fulton Reed got brought out there to fire one of his nasty slap shots in, leaving the opposing goalie whispering to himself, “oh no.” But here’s the thing: that was a movie, and Zion Williamson is a real person, meaning what he’s doing on a basketball court should feel fake — only it’s very real and very dominant.

As someone who saw a few former Kentucky Wildcats ball out at the rec center back in my college days, I can tell you that nothing like this ever happened. So while Zion Williamson is sure to go No. 1 overall in the upcoming NBA Draft, let’s just all appreciate the fact that he’s enjoying college for now — and can let all those kids playing against him in the video above one day brag to their kids that they got posterized by him as a student at Duke a few times.