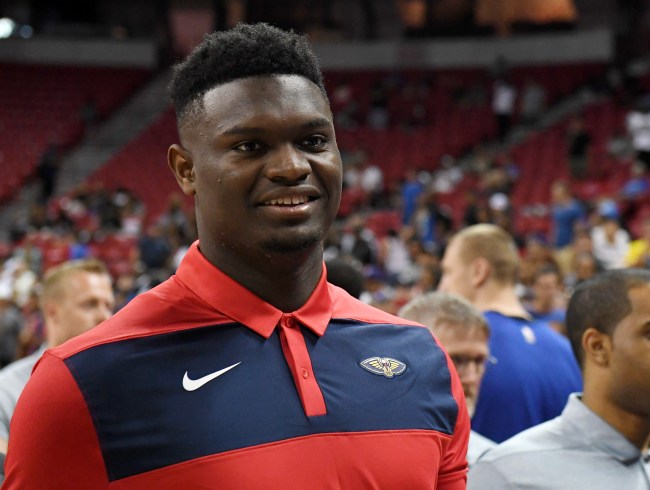 Zion Williamson was the No. 1 overall pick in this summer’s NBA Draft, joining the New Orleans Pelicans and instantly becoming the face of the franchise after the team traded away Anthony Davis. While there are high expectations for the former Duke phenom as he enters his rookie season — especially after inking the largest shoe deal for a rookie in NBA history after signing with Jordan Brand — the kid seems like he’s up for the challenge.

Isn’t that what makes any great athlete elite, though? The will and determination to put pressure on themselves and push themselves to achieve such goals? I’d like to think so. And, because Zion Williamson is presumed to have the “it” factor, the kid isn’t shying away from reaching higher than most people would imagine.

Speaking to Macklin Stern of Complex, Williamson isn’t just focused on living up to his own hype, or winning Rookie of the Year, or making the playoffs. Nope, the kid actually believes that his Pelicans can win a title next season, which would absolutely be an unprecedented feat.

“Me being confident in my teammates, I would say I think the ceiling is [a] championship. But I have to be realistic about this. I have high expectations for us, but you gotta see how we’re gonna work. I think we are going to work, but it does take time to adjust to each player — knowing what they like to do, finding out their tendencies. So I think the quicker we find out those things, I think we have a very high ceiling.”

While that’s bold, Zion doubled down when asked by Stern what’s realistic.

“What’s realistic is sometimes you never know. From the start of the season, who would have guessed the Raptors would have won it [last year]? I’m going to be honest, I didn’t have them in my top five.”

“Yeah, we can win it. I think everybody has that on their minds. View it as just one ball — whoever can put the ball through the hoop more times will get the most points, and that’s who wins. Get the most stops — just gotta see who wins. I try to look at it from that point of view and not from who’s on which team. Any given night, I learned it in college, you can lose a game.”

Well, Zion Williamson sure isn’t shy in voicing his own expectations, right? While it might be insane to you or I to think that the Pelicans can win a title next season, anything can happen, so we’ll have to see how things unfold. Maybe they’re that once-in-a-generation team that just shocks the world.

Williamson also talked about how long he envisions himself playing for the Pelicans, and, if you’re a fan of the team, you’ll be happy to hear the dude hopes to be with the franchise his entire career, referencing idols of his like Kobe Bryant and Dirk Nowitzki, who each played for one franchise their entire careers.

“Growing up, I loved what Kobe [Bryant] did and Dirk [Nowitzki] did,” Williamson told Complex’s Macklin Stern. “…My intentions are to stay with the Pelicans my whole career, but if something happens, I wouldn’t leave because I hate the place. It’s just the business.”

It’s early on in Zion Williamson’s NBA career, so there’s no telling what he might accomplish. But with high expectations for himself and his team, at least he’s not shying away from the expectations and pressure that comes with being a generational talent who’s expected to be the next big thing in the league.