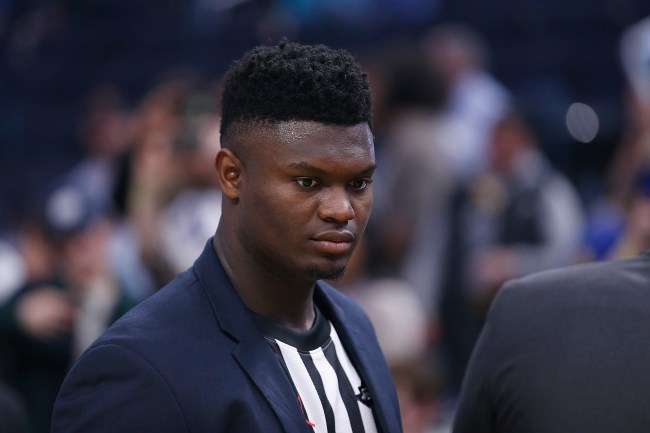 Zion Williamson was supposed to represent the next generation of budding NBA superstars, with the 2019 No. 1 overall pick expected to fill the shoes of other great all-time rookies like LeBron James and even, dare we say it, Michael Jordan. Yeah, no pressure on the former Duke standout at all, right?

Unfortunately, due to a knee injury that’s sidelined him since the NBA Summer League, fans have been deprived of their first real sight of Zion Williamson, instead being fed rumors about when the teenage phenom could possibly return to the hardwood. And while the Pelicans released video of Zion shooting treys a month or so ago as a tease that, just maybe, his debut could be on the horizon, there’s still no definitive timetable for when he’ll actually play.

Given the NBA season is almost halfway over already — and the Pelicans are a lousy 11-23 at the moment — many are debating whether or not Williamson should even play in his rookie campaign at all, with many believing the Pelicans should just play out the rest of the season without him, accept their fate as a lottery team again, chalk this up as a lost year and build more young pieces around the impressive core they’ve already got. Of course, the team wants to sell tickets, holding one of the most powerful young assets in the sport, so they’re hoping to show him off as soon as he says he’s ready.

Sure, it’s a tricky dilemma for the Pelicans, but ESPN’s Jalen Rose isn’t beating around the bush or trying to get cute when it comes to making the call. On his podcast the other day, the former Michigan standout bluntly gave his opinion on the topic, giving the franchise a sense of reality that they need to accept now in order to be better down the road — while avoiding the temptation to rush Zion Williamson back this season.

Do not, Pelicans, put Zion Williamson out on the floor in January. If he tells you he’s ready to go, you say ‘alright big fella, I appreciate that…. Practice for two more weeks and we’ll figure it out.’

I’m not going to just rush him out there like some jock and think that he’s going to win five to 10 games and it’s going to change the dynamics of our season, because it ain’t. It is not! They’re better off getting another lottery pick. This season is over.”

It’s an unbelievably passionate opinion by Rose, and one that makes total sense given Zion Williamson’s recent injury history — which includes a freak knee injury during the middle of the college hoops season last season that cost him games at Duke. If the Pelicans are smart, they’ll play the long-term game rather than get instant gratification of seeing Zion on the floor before he’s ready. And, as Rose bluntly put it: the season’s all but over for them already, so give the kid the next six months off for recovery so he can be 100 percent come the time training camp starts for next season. It’s almost too logical, so we’ll have to see what eventually happens.