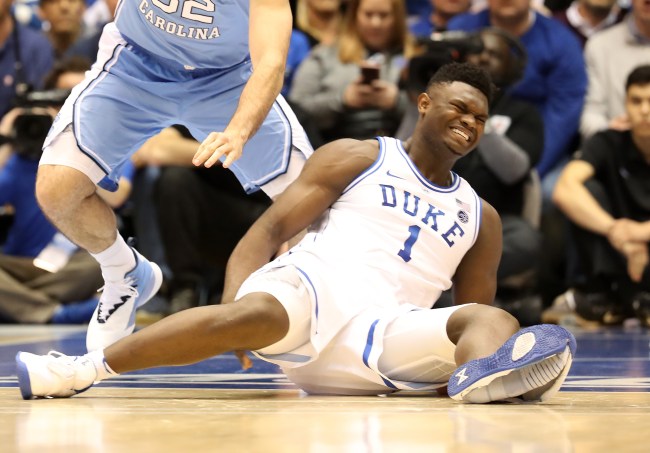 Zion Williamson had a perfect return last night for the Duke Blue Devils in the team’s ACC Tournament quarterfinals matchup against the Syracuse Orange. No, really, he went 13-for-13, poured in 29 points and grabbed 14 rebounds in 35 minutes, so the only flaw the superstar really had was going 2-of-9 from the free throw line. Given the fact Williamson sat out six games, it’s impressive he returned with such vengeance.

While Zion Williamson looked like he didn’t miss a beat following the scare he got a few weeks ago when his damn shoe blew out on him during a game against North Carolina — which caused a mild knee sprain — the shoe manufacturer, Nike, didn’t just sit around and play with their dingalings, hoping that the negative press would just go away. Instead, the company forced themselves into action; and it was all pretty extreme in an effort to prevent a shoe blowing out again.

According to yesterday’s ESPN broadcast, reporter Allison Williams said Zion Williamson’s “special needs” for shoes required Nike to put in some extra work. Zion, who was wearing Nike’s Paul George 2.5 signature shoe in the game it exploded, switched to Nike’s Kyrie Irving’s 4 last night against Syracuse. But the kicks had a little extra protection and development, with Nike sending some of its top officials to both Durham (where Duke’s campus is) all the way to China in order to make sure a stronger shoe could be manufactured specifically for Zion Williamson. That’s some serious star treatment.

Zion is playing tonight's game in a pair of custom Kyrie 4s.

Nike flew a team to Durham to measure and make the shoes for Williamson, per @AllisonW_Sports. pic.twitter.com/AYWwSDv2gv

Here’s what Williamson’s head coach, Mike Krzyzewski added about the extra TLC Zion got from Nike regarding his shoes last night, as well as Zion Williamson’s reaction after ballin’ out against the Orange in those kicks.

Coach K: Nike flew in their top people to Durham the day after the shoe blew out. Those people then flew to China to oversee the manufacturing of a stronger, more stable shoe. They came back to Duke a week later with the shoe.

Zion: "The shoes were incredible this game"

This is huge news for Nike. Sure, Zion Williamson might not yet be able to talk with shoe companies about a sponsorship deal until he declares for the NBA Draft, but given the fact Nike’s stock dropped the day after the exploding shoe incident, Paul George himself showed concern over his own shoe tearing like that and Zion was seen in an adidas track suit during a recent Instagram Live video, seeing the player happy with the result of such hard work is key for the brand moving forward. It seems as if Williamson is back in good faith with Nike — which is probably ready to throw millions of bucks at him in the next few months.