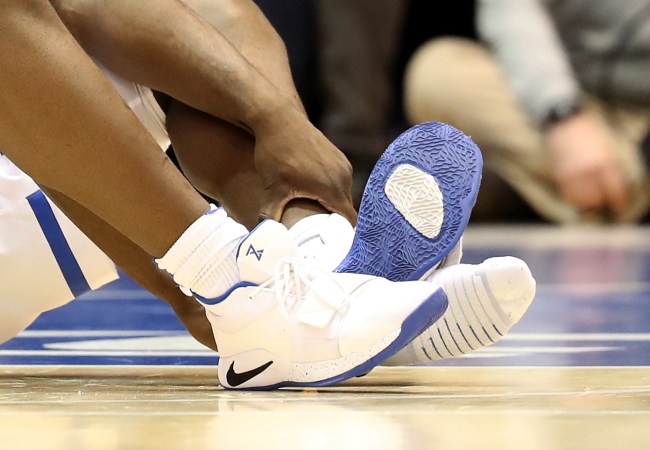 In the moments following Zion Williamson exploding his shoe, mildly spraining his knee, and effectively taking him out of the most hyped game of the college basketball season, the Action Network’s Darren Rovell was fervently refreshing Nike’s stock price to see if it dipped after the major malfunction on National television with OBAMA THERE.

These tangential storylines are Rovell’s bread and butter, and every sports fan in America knows it.

As Rovell says, “What is predictable to some is consistency to others.” Amen.

It’s not a material loss to Nike’s business, but I wouldn’t be completely surprised if Nike’s stock, on no other news, didn’t do a little dip tomorrow morning from this prominent event.

Welp, the numbers are in this morning. And Nike’s business took a hit following the Zion incident.

Nike stock down about 1 percent in first 10 minutes of trading, an on-paper loss of $1.12 Billion in its market cap.

If just 1 percent is $1.12 billion, I think Nike will recover from this, especially considering Zion’s injury is said to be only a “mild knee sprain.”

Or about the same as the lifetime contract they'll sign with @ZionW32 in two months.

Nike released a statement after the injury, saying:

“We are obviously concerned and want to wish Zion a speedy recovery. The quality and performance of our products are of utmost importance. While this is an isolated occurrence, we are working to identify the issue.”