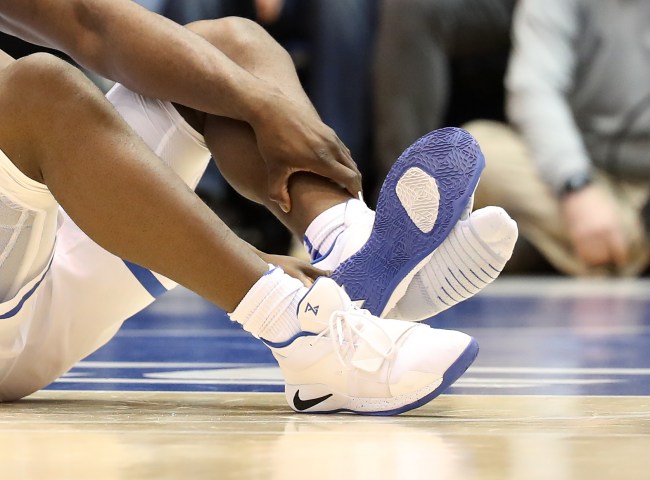 Last night Duke superstar and potential #1 NBA draft pick Zion Williamson went down with a bizarre injury after his Nike PG 2.5 sneakers exploded 30 seconds into the much hyped UNC-Duke game.

While it appears that Zion’s injury isn’t serious, Paul George and Nike have taken a beating online following the injury.

Nike stock down about 1 percent in first 10 minutes of trading, an on-paper loss of $1.12 Billion in its market cap.

With an hour to go before the market opens, Nike shares are down 1.73%. Two pieces of recent news. Obviously Zion’s shoe last night + some Nike Adapt shoes needing updates to function.

PG 2.5, the shoe Zion Williamson wore last night, is discounted between 4.5% and 16% on Nike’s website, depending on color. pic.twitter.com/3B4JaKFIqZ

Nike was forced to issue a statement on Zion’s shoe exploding last night.

NIKE STATEMENT: “We are obviously concerned and want to wish Zion a speedy recovery. The quality and performance of our products are of utmost importance. While this is an isolated occurrence, we are working to identify the issue.”

And today Paul George himself addressed the matter.

“My only concern is for Zion, honestly,” George said after Thunder practice Thursday. “People were making a big deal about the shoe when everything should have been about Zion, his injury. That was the only thing I was concerned about was how bad it was and hopeful it wasn’t something that was too bad and it was something that he could come back from.”

George said he has talked with Nike about what happened to Williamson’s shoe. Nike also released a statement saying the company was “working to identify the issue.” Williamson’s shoe appeared to split through the midsole as he tried to cut hard to his left.

“I take pride in (my shoe line),” George said. “My shoe has been a successful shoe not only in college but in the NBA. A lot of people been in it, a lot of people been wearing them, so I don’t necessarily know. But it’s never happened to my knowledge before, so that’s tough.”

"Talked with Nike…My shoe has been a successful shoe, not only in college but in the NBA."