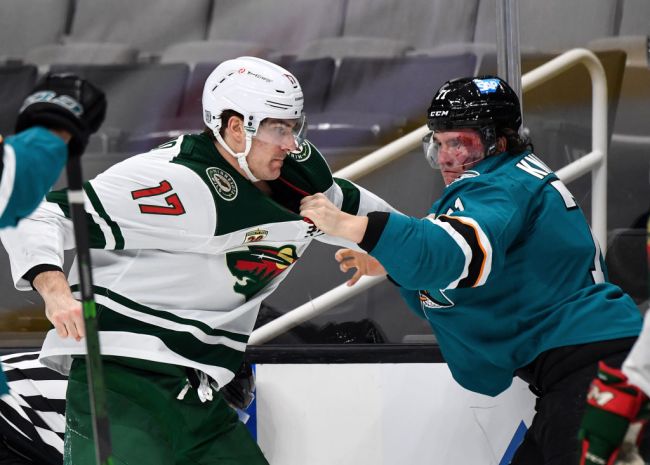 Minnesota Wild winger Marcus Foligno didn’t take kindly to Nikolai Knyzhov and his constant pressure on Monday night. When the San Jose Sharks defenseman skated by with a shove toward the end of the first period, the gloves came off and Folingo went to work. It was a beatdown from the start.

“A stick kind of gets up in the groin area, and you’re not too happy about it,” he said. “That stuff happens, and it’s part of the game.”

The veteran landed a couple of HUGE right hands and connected with Knyzhov’s eye each time, leaving his face a bloody mess. After giving the 22-year-old the business, Foligno held his opponent at a distance and savagely motioned for the referees to come take care of the situation.

At 6-foot-3, 226 pounds, Foligno had a full inch and more than 30 pounds on his scrapmate. He put the young Russian in his place and called it a day.

“I thought it was enough,” Foligno said. “I give that kid a lot of credit. I think there’s things you do when you’re young to answer the bell and you have to do it and you gain a lot of respect from your teammates. So, I’m sure he got that tonight. But there’s no point. Move on. I thought it was kind of over after a couple of punches. That’s all. I’ve had guys let up on me before. It’s just respectful.”

Foligno not only won the fight, but he scored one of the six totals goals in the Wild’s 6-2 win over the Sharks.