Marcus Mariota Shares Awesome Story About Why He Chose To Wear No. 1 With The Falcons 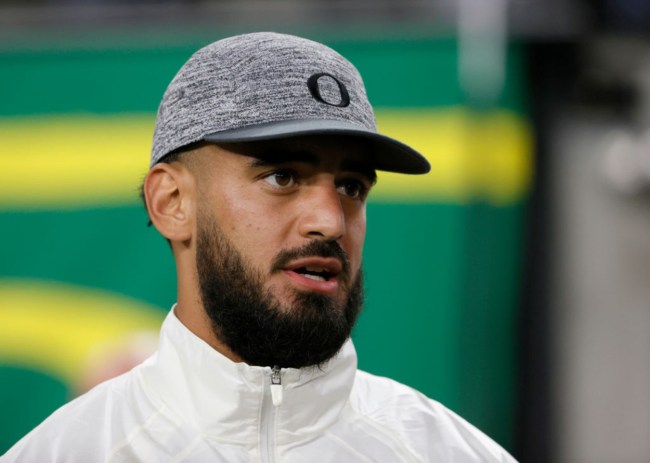 The Matt Ryan era in Atlanta is over after the veteran QB was traded to the Indianapolis Colts. Now, a new era in the ATL is set to begin this season with Marcus Mariota under center.

The Falcons signed Mariota to a two-year deal earlier this week and officially introduced him during a press conference on Friday.

It turns out that this won’t be the first time Mariota has played for the Falcons.

Mariota actually played for the Kalani Falcons as a kid playing Pop Warner football growing up. The former Hawaii star shared the story about playing for the Falcons and why his childhood team made it easy to wear No. 1.

“My Pop Warner team growing up was the Kalani Falcons,” Mariota told the media. “The number I got as a Falcon was 1, so I think I’m going to go back to that. It’s a cool, full-circle moment for me.”

Now, he'll wear it as an Atlanta Falcon 🙏 pic.twitter.com/SSsy7E6Sm9

Mariota obviously has big-time shoes to fill left behind by Ryan.

The former second-overall pick by the Tennessee Titans spent the first five years of his career in Nashville. His new head coach in Atlanta, Arthur Smith, was a member of the Titans’ coaching staff throughout his stint in Music City.

Mariota is surely looking forward to being the No. 1 QB on the roster after spending the last two seasons behind the backup to Derek Carr in Las Vegas.