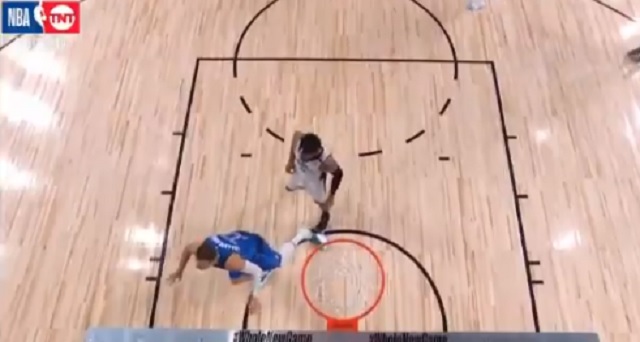 Things got a bit chippy between the Mavs and the Clippers during Game 5 of their playoff series.

Throughout the game, both teams could be seen chirping at each other.

The teams nearly came to blows later in the game.

But one specific play angered many Mavs fans.

Late in the third quarter, Clippers forward Marcus Morris Sr. stepped on Luka’s injured ankle while defending him in the backcourt.

Based on the video it’s unclear if it was intentional but Mavs fans think it was.

This is the sideline video of Marcus Morris stepping on Luka's shoe…..still can't tell if it was intentional or not. pic.twitter.com/6SKk3UrMV9

Marcus Morris should be suspended and ejected. Piece of Crap.

What Marcus Morris just did was obviously and clearly intentional & is utterly outrageous.

The future face of the league & you intentionally try to re-injure his ankle. The league has to look at that.

I play this game with a level of respect for myself and other players. To think I would try to injure somebody is crazy to me. 10 years going against the best. I stand on morals and hard work. I compete and leave it out there every game.

Basketball has never been that serious to try to hurt somebody. Im not apologizing for shit because I know what I put into this game day in and day out. It was a mistake deal wit it. Competing is why I play.