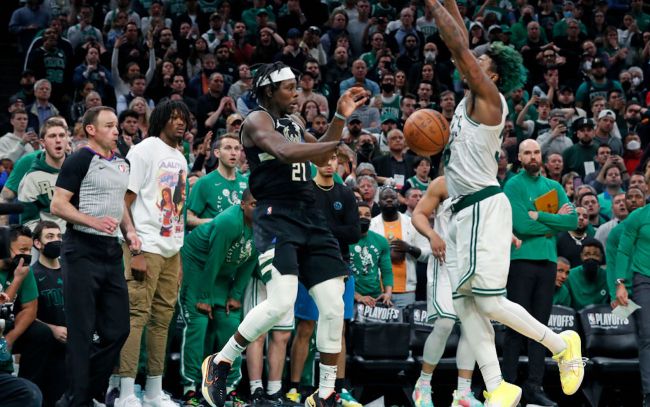 After tying the series up with a gutsy road win in Milwaukee in Game 4, the Boston Celtics ultimately receded home-court advantage back to the Bucks after losing Game 5 on their home floor by a score of 110-107.

To make matters worse for the Celtics, the loss came thanks to a blown fourth-quarter lead as they were outscored by the Bucks 33-21 in the final period, culminating in a game-clinching block by Jrue Holiday on Marcus Smart with just about 10 seconds remaining in the game.

WHAT A BLOCK BY JRUE HOLIDAY.

AND HE EARNS THE POSSESSION 🤯

Jrue Holiday did what he does! pic.twitter.com/VwBUG8pa7G

As soon as the play unfolded as it did, NBA fans were quite confused as to why Boston drew up a play for Marcus Smart instead of Jayson Tatum (who had 34 points in the game) or Jalen Brown (26 points)

Marcus Smart's reaction to Jrue Holiday's strip actually deserves this so I'm sorry for going back in meme history pic.twitter.com/oeUZl3Qz6Q

Marcus Smart The Joker
🤝
Green hair and no plan https://t.co/NmrWHeLXEV

Smart’s decision making on the final play of the game — which wound up with Jrue Holiday coming away with another clutch steal — was also called into question, as The Big Lead pointed out that Smart had three options on the play and ultimately wound up choosing the wrong one.

Smart put his head down and seemed to decide that he’d figure out what to do once he got across half court– Choice No. 3. This decision was perhaps made for him because he seemed to lose his handle for no reason after getting past Bobby Portis. Even so, it was clear from the get-go that Smart’s first priority wasn’t getting the ball to somebody who could make the shot. It was to get the ball up and then see what happens. It was the worst of the possible options in front of him, and his team paid the price. [via The Big Lead]

The Bucks will look to advance to the Eastern Conference finals on Friday night when they take on the Celtics in Game 6 in Milwaukee. With the prospect of a Game 7 in Boston, the Bucks will be certainly be looking to close out the Celtics at home while they can.

RELATED: 7’6″ Tacko Fall Sat Courtside At A Celtics Game And People Felt Awful For The Person Behind Him