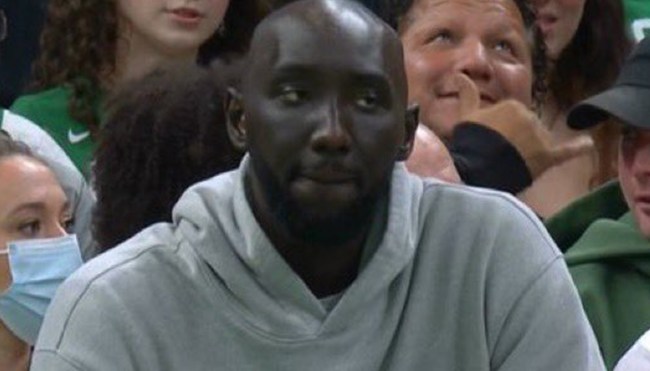 It’s pretty easy to understand why people are absolutely fascinated by Tacko Fall, the 7’6″ Senegal native who initially made a name for himself as a member of the basketball team at the University of Central Florida before kicking off his professional career with the Boston Celtics.

After all, we’re talking about a guy who entered concussion protocol after he bumped his head on a ceiling, and given the general public’s fascination with people gifted with an abnormal amount of height, it’s only natural they’re absolutely captivated by one of the tallest human beings to ever walk the planet.

The big man was kind enough to shed some light on how he grapples with that unavoidable attention when I got the chance to chat with him for one of the more insightful interviews I’ve gotten to conduct over the years. His height might not be something he’s consciously thinking about, but it does still present its fair share of issues—including one that arose on Wednesday night.

Fall—who wrapped up his G League season last month—made his grand return to TD Garden to watch his former team take on the Bucks in the fifth game of their playoff series.

Tacko Fall in the building for Game 5. Celtics by 6. pic.twitter.com/1zrC0mz909

Get someone who looks at you the way Brad Stevens looks at Tacko 🥺😂 pic.twitter.com/bmVomLmEJJ

Fall also had a prime spot to watch the action unfold, as he posted up in a courtside seat next to one of the baskets.

However, the same can’t be said about the unfortunate fan who ended up behind him, who experienced an outpouring of sympathy after their plight came to the attention of the internet.

"Those are expensive seats! If I'm in the second row and sitting behind Tacko Fall I'm furious" pic.twitter.com/BGaRjQpvwN

Thoughts and prayers to the person sitting behind Tacko trying to see the game pic.twitter.com/4txGSEmi8D

This poor girl having to sit behind Tacko Fall!#NBATwitter pic.twitter.com/8d3tVUMLD5

It’s unclear how much the person in question paid for the seat, but as of this writing, one seller on StubHub is currently asking $4,620 for a ticket in a similar location for a Game 7 that will only be played if the Celtics can tie the series in Milwaukee on Friday night.

However, Fall eventually did what he could to make amends.

Tacko Fall just gave the woman sitting behind him a large cushion to sit on so she can now see over him.