Marcus Spears Believes This Off-The-Radar Defender Should Go No. 1 In The NFL Draft 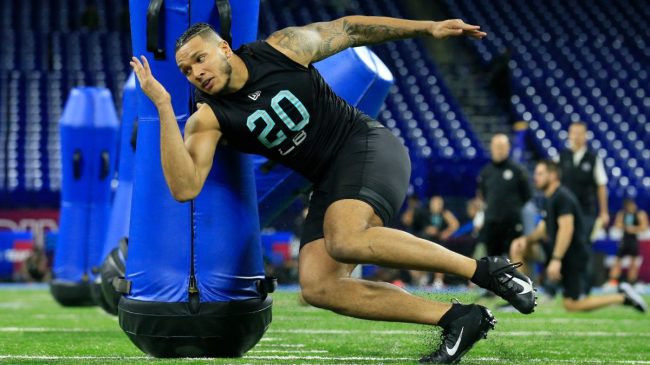 The NFL Draft will kick off on Thursday night with the first round of action getting underway.

This year’s class boasts a ton of talent on the offensive and defensive lines, while also flashing playmakers at both wide receiver and cornerback.

While it’s lacking a headliner at quarterback, the unpredictability of this year’s draft outcome should make things very entertaining for viewers.

Most mock drafts have a one-two punch of defenders coming off the board early, with many believing that Georgia’s Travon Walker will go just ahead of Michigan’s Aidan Hutchinson. After that, things get a little tricky.

We could see teams start to shore up their offensive lines, or they might choose to add a boost to the secondary. Like we said, it’s hard to pinpoint what teams are thinking heading into this year’s event.

Right now, Walker is the betting favorite to land at that No. 1 spot, but ESPN’s Marcus Spears believes that there’s a name that no one is talking about that should be in consideration.

Here’s what Spears had to say about the pass rusher.

“I think he’s the most polished, ready pass rusher to leave college and go to the NFL. His hand use is phenomenal. He understands how to track quarterbacks within the pocket.”

Johnson has begun to slide up draft boards, but no one has been bold enough to place him at No. 1. He could go as high as No. 4 to the Jets according to some of the latest mocks.

It’s an opinion that Spears has been adamant on all week.

I have Jermaine Johnson the 2nd best DE in the draft and it ain’t far between him and Hutch. Like Damn near even too my eyes ! He’s Polished as a rusher more than any of em ! Damn I may have him 1 ! I’m confused but in a good way

We’ll see if the Jaguars take a chance on Johnson with the first pick on Thursday night.