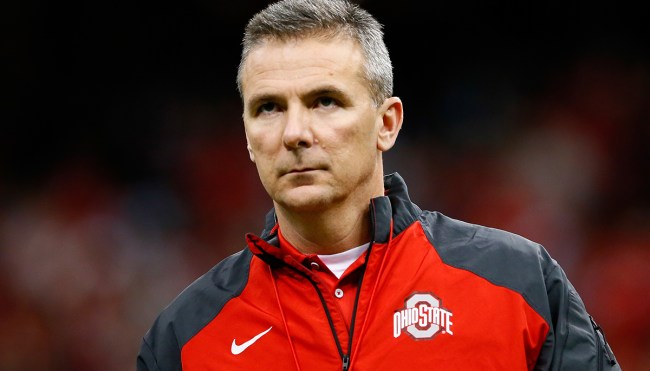 Urban Meyer has been surrounded by controversy his entire career. That’s been no more evident than in 2021, a year in which he was fired midseason in his first NFL coaching gig with the Jacksonville Jaguars. While his team’s performance on the field was uninspiring, it was off-the-field issues that ultimately led to his dismissal.

In just his first season, Meyer stirred the pot and tore down the culture inside the Jacksonville locker room. There were allegations of infidelity, followed by rumors that he called his hand-picked staff “f—king losers.” His dismissal was made official after his 13th game when he kicked one of his players in a practice session, all but ending his coaching career at the professional level.

Of course, this shouldn’t have been surprising to fans and followers. Meyer has caused issues at every stop, dating back to his first head coaching gig at Bowling Green. There, he’s accused of having abused a number of players including one which he later kicked off the team.

At Florida, he saw 25 of his players get arrested and built a toxic culture inside the program. He retired amid health issues in 2010 (although a 7-5 regular season record may have had something to do with that) only to pop up at Ohio State two years later.

His time with the Buckeyes wasn’t any better. While his teams were winning titles on the field, drama was never far behind. There was the Zach Smith domestic abuse incident, plus Smith and Tom Herman’s strip club/recruiting trips. Now, even more about his tenure at Ohio State is becoming evident.

Marcus Williamson played for Ohio State between 2017 and 2020. He was a freshman in Meyer’s second to last season with the Buckeyes. The defender went on a social media rant last night during his alma mater’s matchup in the Rose Bowl. His posts paint a picture of the toxic atmosphere that overshadowed the program.

One, which is the most egregious, alleges that a picture of Trayvon Martin was presented on a PowerPoint to the team about not wearing hoods in the athletic facilities. Martin was shot and killed at the age of 17 by a police officer that followed him for looking suspicious while wearing a hoodie. The case drew nationwide publicity and shows the atmosphere of insensitivity and fear that Meyer led his programs with, particularly with most of his players being African American.

As a 17 early enrollee. Urban Meyer told me he’d “ruin my f—- life” if he ever caught me smoking

My first team meeting. (True story 2017) This photo was presented to us via PowerPoint to institute our building wide rule of “no hoods” in the building pic.twitter.com/bGdJVZaEVT

S/O NIL. These boys can at least own their name now (sarcasm)

Participate in your lecture/discussion in your 8 am class after a mat drill at 6 am (arrive a 5 if you’re a freshman). …PROFESSOR My hands are bleeding from the rope pull but you want me to grab my pencil??

Other tweets on Williamson’s timeline include Meyer telling him that he’d “ruin his f—king life” if he was ever caught smoking, while he also touched on student-athletes being treated as expendable. The cornerback says that he was forced to play through injury, remembering how he’d often have to put his shoulder back in place after a night’s sleep before participating in practice later that day.

These allegations continue to support the idea that Urban Meyer is just not a good person. Though he’s seen success on the field as a coach, there shouldn’t be a place for him on any staff moving forward.