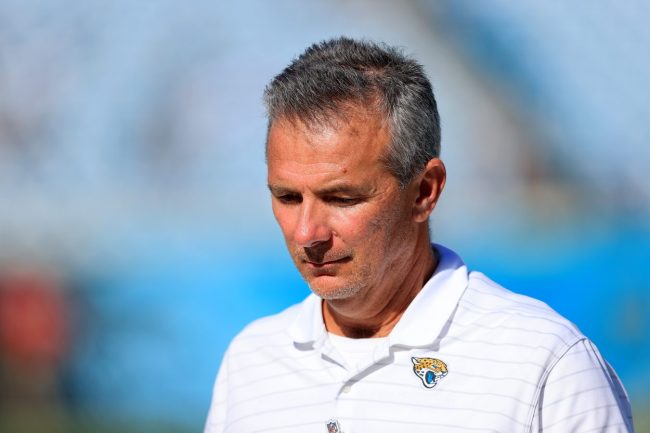 Things are not going well for Urban Meyer at the moment. The 57-year-old was recently fired by the Jaguars for cause, and as more details come out about his coaching practices, things are only getting worse.

Meyer, who has spent time as the head coach in Jacksonville and with Ohio State, Florida and Utah, began his career at Bowling Green in 2001 and 2002. And now another one of his former players is speaking out.

Former Falcons wide receiver Aaron Alexander took to Twitter and claimed that he and his teammates were abused by Meyer at Bowling Green. His allegations came in response to a post from Jemele Hill that questioned how he treated college athletes.

@jemelehill In my 5 yrs at BG we were struggling for wins, I guess we thought that’s what it took to win, no one ever reported his abuse at BG. I myself was kicked off the team for retaliating but he had physically abused several players before it got to me..

Alexander, who was a redshirt senior during Meyer’s first year with the program, did not stop there. He issued a detailed review of Meyer that alleged a serious culture problem and legitimate abuse.

Bowling Green WR Aaron Alexander (@DoubleA101778) was a redshirt senior during Urban Meyer's first year as a head coach. He just left a review on OfficialVisit detailing his physical altercation with Meyer and ensuing dismissal:

His comments alleged a myriad of issues:

Alexander’s allegations come as no surprise. Over the course of the last few weeks, Meyer’s players have made it very clear how he treats them.

Former Jaguars kicker Josh Lambo made some very serious claims that ultimately led to Meyer’s ousting. His comments came shortly after a scathing report came out about Meyer getting into it with one of the league’s most respected veterans and his own coaching staff.

Needless to say, Meyer is an objectively bad dude and apparently ‘everybody hates that motherf—ker.’