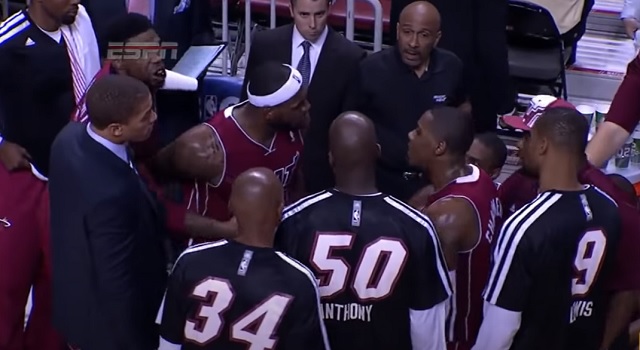 We now know why LeBron James was mad at Mario Chalmers during their infamous sideline altercation while the two were teammates in Miami.

The Lebron documentary gonna be so funny just off the bullying of Mario chalmers arc 😂😂 pic.twitter.com/pTSdghxnly

Mario Chalmers spoke with Five Reasons Sports and revealed what he told LeBron that pissed of LeBron so bad during that game.

According to Chalmers, he was annoyed that LeBron was complaining too much and called him a “bitch” which apparently a word LeBron doesn’t like.

Fun fact: Mario was mad at Bron here for playing super passive during this game, and told him “stop playing like a bitch”, which is Bron’s trigger word. https://t.co/1WyHstHUEr

Found the pod on youtube. Here’s the segment. Around the 40 min Mark https://t.co/dRCHBF9WOT pic.twitter.com/zkmQQcBDBY

It was kind of like, I felt like he was complaining too much about what was going on and I was like you’re the star player of the team stop playing like a bitch and let’s just start playing basketball…and anyone that knows LeBron knows that word bitch he doesn’t like and that’ll get him going no matter where he at, no matter no time of the day, if you want to get in Bron’s head just say the word bitch and that’s what will happen

It doesn’t seem like Chalmers is lying considering we saw what happened when Draymond called LeBron a “bitch” years later during the NBA finals.