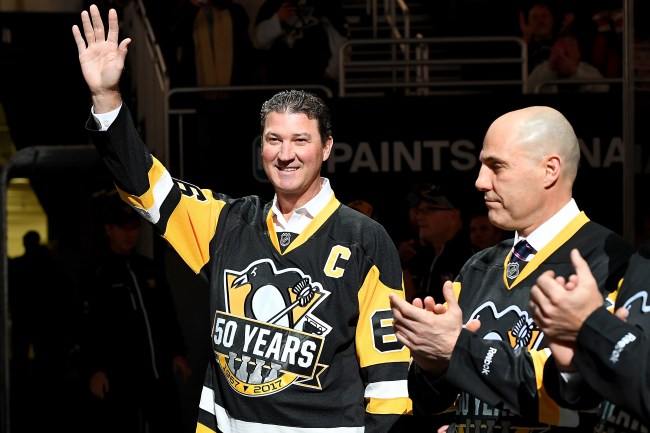 In November of 2016, Pittsburgh 93.7 sports radio host Colin Dunlap’s daughter was diagnosed with Hodgkin’s lymphoma at the age of five. One month later, Dunlap posted a video of his brave daughter refusing to accept help up the steps even though her body was being ravaged by the chemotherapy. It garnered over 100,000 retweets and it’s easy to see why.

my daughter's body is crushed by chemo but she won't let me carry her up steps to bed. "I'll make it,"she says each night-and does. so tough pic.twitter.com/4xe9VecqI0

Pittsburgh Penguins co-owner and hockey legend Mario Lemieux battled the same illness during the 1992-93 season when he was limited to 60 games and miraculously came back after treatment to win the scoring title with the Penguins. Lemieux took it upon himself to send Dunlap’s daughter a care package accompanied with a heartfelt note that can be read below.

This came to our home today 100 percent unsolicited.
You talk about class?
Mario Lemieux is the height of class. pic.twitter.com/ba5eFM751d

This is far from the first time Mario has sent personalized letters to kids fighting cancer, almost all of which are not covered by the media.

“A lot of what Mario does is behind the scenes,” Penguins vice president of communications Tom McMillan told NHL.com. “He’s done these kinds of letters for years. Usually they don’t become public. This one did, which is fine. It’s kind of always been the belief that just a word from him, someone who’s been through it, could mean a lot. So, that’s just the purpose of him doing that. We obviously were aware of Colin’s daughter’s situation.”

Pittsburgh star running back James Conner also sent Dunlap’s daughter a jersey and autographed photo to help bring her some light in a difficult time.

No matter which team you root for @JamesConner_ is someone you root for.
Thanks for giving a 5yo so scared a bunch of hope.
You're a hero. pic.twitter.com/7g4NbeAVdR