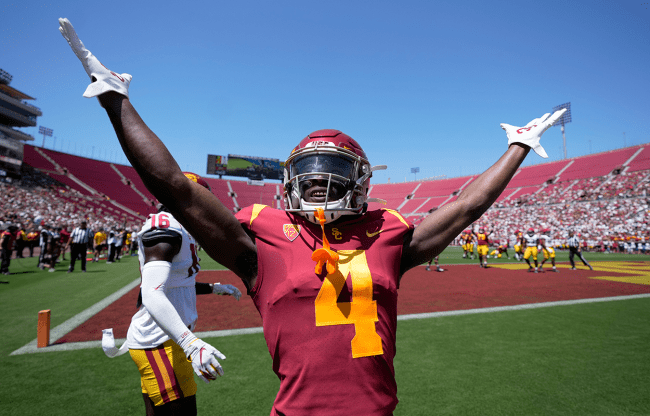 USC football is set to be one of the biggest boom or bust teams in college football this fall. After hiring Lincoln Riley during the offseason and bringing in a lot of high-profile transfers, the Trojans have College Football Playoff aspirations.

Two important pieces to that equation are Romello Height and Mario Williams. Height is a linebacker who transferred in from Auburn while Williams will catch passes from Caleb Williams after transferring with him from Oklahoma.

Height stands 6-foot-3, 230 pounds. Williams is 5-foot-9, 185 pounds. Despite their discrepancy in size, they are both in top shape and built to compete on the Power Five level of college football — not necessarily to withstand yearly, unsuspecting hits from one of the biggest, strongest players in the NFL.

Would Williams and Height take a hit from Aaron Donald every single year for the rest of their lives in exchange for $10 million?

Height and Williams stopped by the truck to be on the podcast earlier this month and talked about a variety of different topics.

During their appearance, the question was posed to each of them. Would they be willing to take hit from Aaron Donald at any point during the year, every year, for the rest of their life in exchange for $10 million?

Williams was quick to say no, but Height had to think about it. Here is their full debate:

I, for one, am passing on the offer. I don’t need to be getting gobsmacked by a still-buff Aaron Donald when I’m 50 years old.