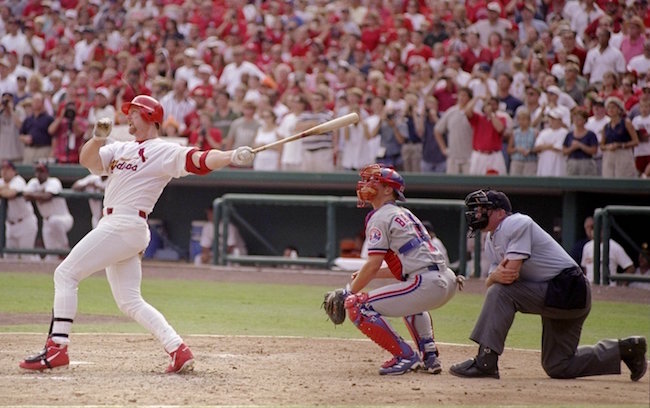 1998 was a great year for baseball fans and steroids alike, with the latter playing a leading role in the ultimately tarnished race between Sammy Sosa and Mark McGwire to break Roger Maris’ record of 61 home runs in a season. McGwire— who literally had a bottle of performance-enhancing (and, at the time, technically legal) drugs in his locker— came out on top with a total of 70 homers over the course of the season (a number which would eventually be surpassed by noted PED-enthusiast Barry Bonds).

After skirting around his steroid use at an infamously useless congressional hearing, McGwire eventually came clean in 2010— a year before Bonds would go on to make the same admission in the wake of the BALCO scandal (although the former Giant pled ignorance by blaming a personal trainer). However, based on recent comments, McGwire think could have performed just as well without PEDs because he apparently enjoys lying to himself as much as he does to other people.

According to The Washington Post, McGwire spoke with The Athletic’s Jayson Stark and claimed that he would have hit 70 home runs with or without the help of steroids, saying:

“I just know myself. I just know. I was a born home run hitter. I mean, unfortunately, I did [take PEDs]. And I’ve regretted that. I’ve talked about that. I regretted it. I didn’t need to. That’s the thing. Didn’t need to.”

This, of course, begs the question of why McGwire took PEDs in the first place. I guess there’s a chance he’s just a fan of an increased amount of body hair, random outbursts of rage, and shrunken testicles, but I guess there are some things in life we’ll never know the answer to.