Mark McGwire Refused To Extend The Guy Who Caught His 70th Home Run A Simple Courtesy, And Now He’s A Millionaire 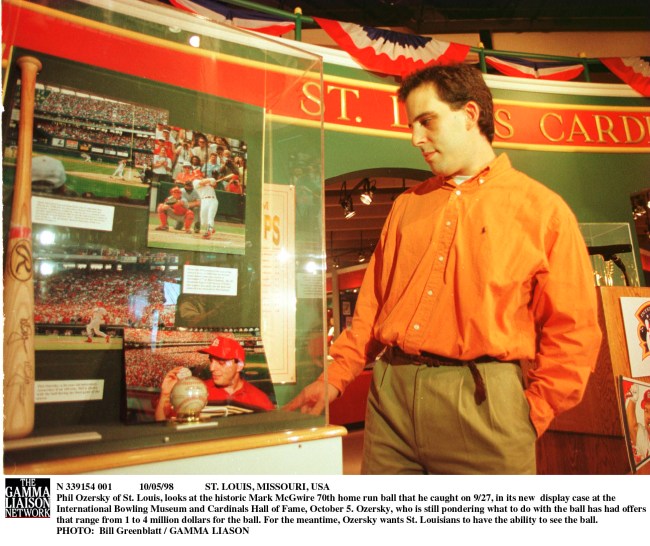 No one in the history of human civilization has benefitted more from a cold shoulder than Phil Ozersky.

Ozersky was a 26-year-old genetic researcher at Washington University when he caught Mark McGwire’s prominent 70th home run ball on September 27th, 1998, a feat that would only be bested by Barry Bonds three short years later (73) and will forever be remembered as one of the most enthralling sports stories of the last century.

Shortly after he caught the coveted baseball, the Cardinals organization offered him a signed bat, ball and a jersey in exchange for his historic souvenir. Ozersky decided to play his hand and asked for one other sweetener: to meet Mr. McGwire.

“I was really adamant about just wanting to meet the guy, and they were like, ‘The Cardinals and McGwire don’t negotiate,’” Ozersky told the East Bay Times in 2007. “It was pretty testy, and they basically made the decision for me.

Fortunately, Big Mac told Ozersky to piss off, and three months later, he sold the ball for $3.05 million to Todd McFarlane, creator of the Spawn comic book that was later made into an Emmy-winning HBO series and a $100 million-grossing New Line Cinema movie.

Today, he would be hard pressed to get $1 million total for those seven balls. #LongGoneSummer pic.twitter.com/HUVHxTUAwn

Trade the Cardinals ask for: The ball for a signed bat, ball & jersey.

Ozersky took home $2.7 million after paying a $300,000 auction commission. For those scoring at home, that is nearly 100x his salary at the time.

Ozersky has done right by the money he’s received from the sale. He donated $250,000 to charities including the Cardinals’ own Cardinal Care, has traveled the world, and moved into a large home in the St. Louis suburbs.

He could have very well ended up like the poor sap who caught Ken Griffey Jr.’s 500th home run ball  in 2004 and surrendered it to the Reds star immediately, receiving a bunch of memorabilia and a trip to the All-Star Game that season.

“I don’t think McGwire would have done that for me,” Ozersky said. “He would have been, like, ‘Thanks.”‘