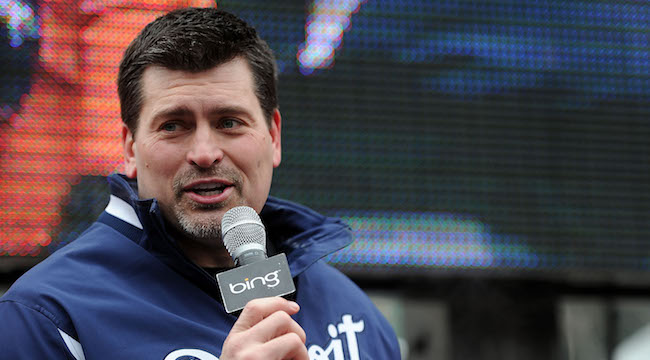 Countless athletes have parlayed their time playing professional sports into a relatively cushy career in broadcasting, and for good reason. As Tony Romo proved on multiple occasions this year, there aren’t many people who are better at analyzing the game than the ones who devoted their life to playing it.

One of those people is 12-year NFL veteran Mark Schlereth, who has been offering his takes on football and more since retiring from the league in 2001. As of now, his days consist of hosting a sports radio show in Denver and spending a bit too much time arguing with people on Twitter.

If you’re going to be a successful commentator, you have to be willing to stir the pot a little bit while taking special precautions to ensure you never go full Skip Bayless. Schlereth did exactly that last week when he put out a couple of tweets suggesting Oklahoma quarterback and Heisman Trophy winner Baker Mayfield might have a tough time transitioning to the pros.

Great point playing in the big 12 is identical to playing in the NFL I mean look at all those big 12 QB’s tearing it up in the NFL. I stand corrected he is already an elite NFL QB. My mistake. https://t.co/KJd4OdKOOJ

The Heisman? Please that’s a garbage award. Who was the last Heisman QB to be worth a 💩in the NFL? Get lost OU fan boy. https://t.co/Lu5iEvnvj5

The tweet prompted Sooner fanboys and fangirls to come out of the woodwork, and Schlereth was more than ready to take them on. After a few days of back-and-forth, one fan slid into his mentions who opted to go with the “Who even are you?” route in order to undermine his credibility.

The three-time Super Bowl champion responded with a clapback for the ages.

I’m the first person to admit how easy it is to forget how certain broadcasters earned their credentials in the first place— it’s literally impossible for me to imagine a time in which Cris Collinsworth was a Pro Bowler for three straight years. However, when you live in a time when it takes five seconds to find out who someone is, it’s probably wise to look them up online before you set yourself up to get put on blast.