Ex-Marlins President: Barry Bonds Was A ‘Complete Disaster’ As A Hitting Coach 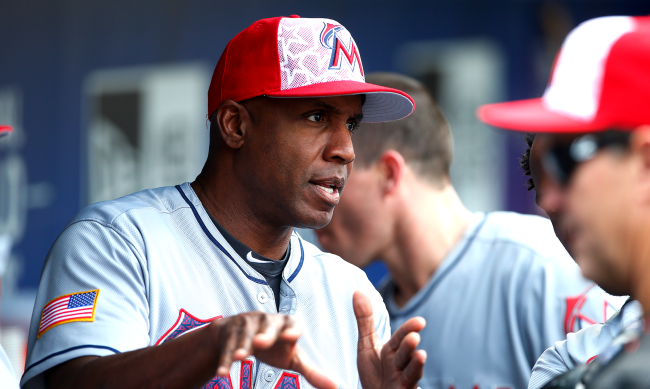 Major League Baseball is littered with stories about how some of the greatest players in the history of the game failed miserably when they tried to transition over to becoming a coach.

Arguably the greatest hitter of all time, Ted Williams was just 273–364 as a manager. Rogers Hornsby, who has a lifetime batting average of .358, was 701–812. Meanwhile, Tony La Russa – career .199 average – is third on the all-time wins list for managers.

The same comparison can be used for hitting coaches. Just because someone could rake when they played, doesn’t mean that they can communicate how to do it with the players they are trying to assist.

Case in point: Barry Bonds and the Miami Marlins.

On Friday, former Marlins president David Samson appeared on The Dan Le Batard Show with Stugotz and discussed Bonds’ one season working as the Marlins hitting coach before being fired.

“He had fun as a hitting coach because he would hang out with [Giancarlo] Stanton and give Stanton some pointers. But he was ineffective, completely,” said Samson. “He would sleep in the clubhouse. He would not pay attention during games. He did not work hard. It was a complete disaster.”

Related: Barry Bonds Says He Feels ‘Like A Ghost’ And That Major League Baseball Has Given Him A ‘Death Sentence’

In fact, it was somewhat of a miracle that Bonds was hired in the first place after being combative in his interview and demanding a salary of $1.5 million, according to Samson.

“It was the worst interview I’ve ever been a part of,” Samson recalled. “Bonds was an absolute pain in the ass about pay because he knew he had the job.”

Samson says he never would have hired Bonds, but then-Marlins owner Jeffrey Loria, who set up the interview, overruled him.

Then, to hide the fact that Bonds was making well more than any other coach on the team was earning, most of hs salary was secretly deposited into a private holding company owned by Bonds.

During the season, Marlins player Dee Gordon was suspended by Major League Baseball for using PEDs.

“We’re in a team meeting, Dee is apologizing for doing steroids, or getting caught for doing steroids, and Barry Bonds, in the middle of the clubhouse, he’s standing toward the backdoor, he screams, ‘This is crap!’ and he walks out,” Samson remembered. “I look at [general manager] Mike Hill and I say, ‘Are you kidding me?’ Like Barry Bonds just stormed out as though he can’t believe one of the players did steroids? Is that really possible?”

All in all, Bonds time in Miami was basically just Barry being Barry.

“It was all about Barry. We had to do so many special things for him in terms of how we traveled, the hotel and the suite and the food, the money. It was just an absolute nightmare,” said Samson, adding, “He didn’t sell a ticket, he didn’t do anything to benefit the team at all.”

So then, I guess Bonds won’t be getting into the Hall of Fame as a coach anytime sooner either.

Listen to Samson’s entire segment on the show below…