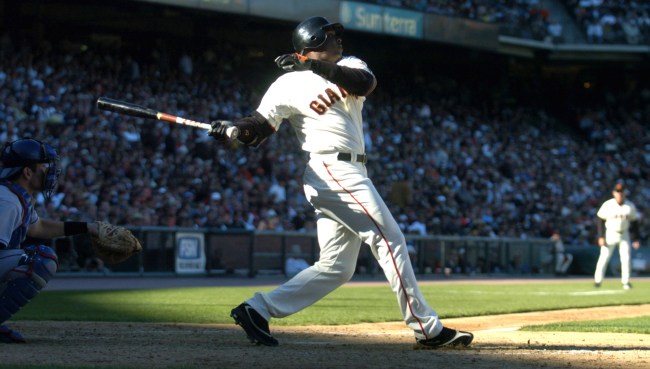 Seven-time National League MVP and the game’s all-time home run leader Barry Bonds says these days he feels “like a ghost” and that Major League Baseball has given him “a death sentence.”

After 22 seasons, eight Gold Glove awards, a record 12 Silver Slugger awards, and 14 All-Star Game selections, the 55-year-old Bonds has two more years to gain election to the National Baseball Hall of Fame before being taken off the ballot.

Bonds worked as the hitting coach for the Miami Marlins during the 2016 season and is currently at San Francisco Giants spring training working as a guest instructor and says no other team wants to have anything to do with him. And it bugs him.

“I feel like a ghost,” Bonds told Andrew Baggarly of The Athletic on Saturday. “A ghost in a big empty house, just rattling around.”

“A death sentence. That’s what they’ve given me,” he added, then after a pause, “My heart, it’s broken. Really broken.”

Bonds, who also owns the Major League Baseball records for slugging percentage in a single season, on-base percentage in a single season, career walks, and career intentional walks, and is the only player in MLB history to compile at least 500 home runs and 500 stolen bases, claims he just wants to be told flat-out if he is welcome in the game or should just go away.

He said he doesn’t need a plaque in Cooperstown to validate a career that includes 762 home runs and a record-setting seven league MVP awards. (And because his support among voters appeared to stall out at 60.7 percent in his third-to-last appearance on the ballot in January, it’s a longshot that he will ever reach the 75 percent threshold for induction.)

Nor would opening the doors to the Hall of Fame repair what Bonds described as a heart broken by baseball.

When asked how he would fare against today’s pitchers if he was playing, Bonds replied, “They say everybody throws 100 mph now. Well, that would be easy for me then because I don’t have to adjust that much.”

Technique and a little help from pharmaceuticals.