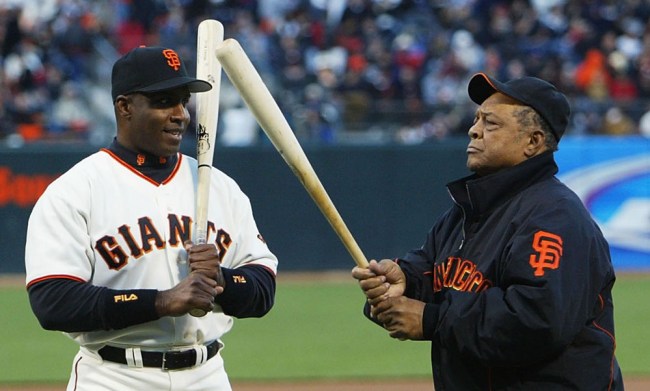 Willie Mays is one of the greatest players in Major League Baseball history. He won two National League Most Valuable Player awards. He hit 660 home runs – third most when he retired and currently fifth all-time. He won a record-tying 12 Gold Glove awards, and could have won more but the award didn’t exist until his seventh season. In 1999, he was voted second on The Sporting News’s list of the 100 greatest baseball players. And he shares the record for most All-Star Games played in with 24. TWENTY-FOUR!

So he knows a thing or two about baseball.

This past Saturday, August 11th, the San Francisco Giants retired Bonds’ number 25. Giants legend Mays, speaking during the ceremony at AT&T Park, implored Hall of Fame voters to induct the man he calls “his little son.”

“Give somebody honor that deserves to be in the Hall of Fame,” Mays told the crowd. “When you get there you’ll say ‘Man, how did I get here?’ And I want him to have that honor.”

“On behalf of all of the people in San Francisco and the country, vote this guy in,” Mays begged.

Oh yeah, Mays is also Bonds’s godfather. So he might be a little bit biased.

That being said, Barry did have a hell of a career. But was it Hall of Fame worthy, knowing what we know? What do you think?