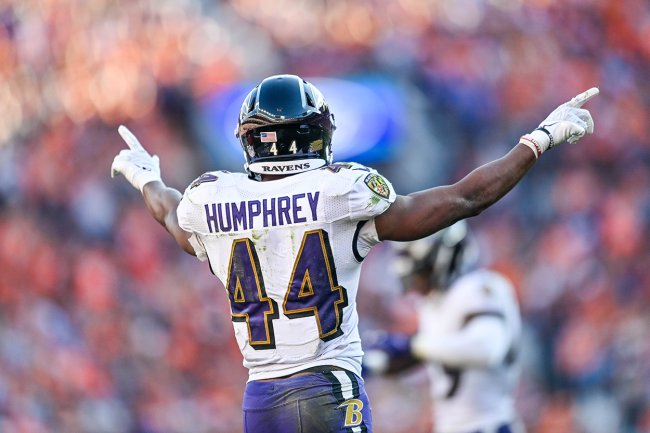 EA Sports is just over two months away from releasing the newest edition of ‘Madden.’ In the meantime, it might have a lawsuit on its hands.

Not really, but the warning shots have been fired.

As the video game company prepares for the Madden 23 release, it has dropped a few trailers about what the new game might look like. It does it every year, sharing new features, new graphics and new gameplay.

This year, Ravens defensive back Marlon Humphrey was on the wrong end of one of EA Sports’ trailers. He was not thrilled.

First, the preview image for the trailer showed Browns running back Nick Chubb putting a big stiff arm right in Humphrey’s chest. The Baltimore defender knew that it was over from the jump.

When the full trailer dropped the next day, Humphrey found out that he was right. It was not a good situation for virtual him. He got bowled right over by Chubb.

In response, Humphrey said that he wanted to have his name removed from the game or else he was pursuing legal action. And his teammate Tony Jefferson was set to join in.

Now, Humphrey was kidding about suing EA Sports over the Madden trailer, of course. Or was he?

24 hours after dropping a trailer in which Humphrey got rocked, they dropped a revised trailer. This time, Humphrey forced a fumble on Chubb and pulled him down to the turf with the help of Jefferson.

It was a peace offering that went a long way, but EA Sports isn’t off of the hook just yet!

This makes me feel better. The lawsuit still going through though https://t.co/z0idrKLYuF

Jefferson was not too quick to make amends either.

It looks like the Ravens secondary will be playing with a chip on their shoulder this fall. Chubb better look out for real light Humphrey and Jefferson.