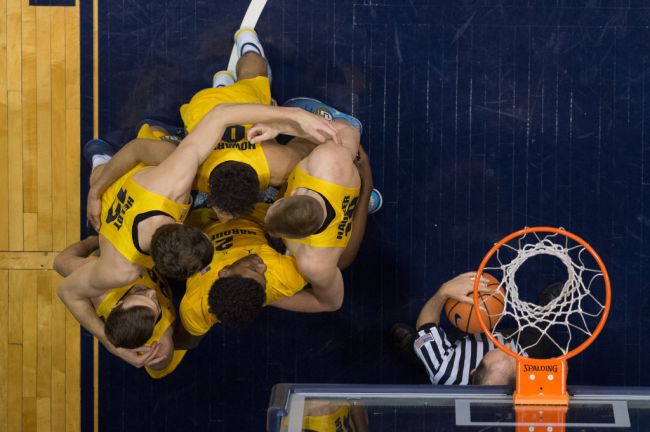 Playground basketball culture is premier in New York City, but it’s not often that a Division I college team takes over an outdoor court like Marquette basketball did on Wednesday. The Golden Eagles were slated to play their first postseason game of 2021 at Madison Square Garden at 3:00 p.m. EST, but couldn’t get access to an indoor court for the team walkthrough. All of the teams are sharing the same hotel and the Garden was getting prepped for the weekend’s Big East Tournament, so head coach Steve Wojciechowski had to improvise and brought his guys out to the asphalt.

No court access for morning walkthrough so we improvised. #mubb #playgrounddays pic.twitter.com/K3VluvtPUM

Marquette ran through its usually pregame routine about four miles south of MSG at the Battery Park courts. It was a 50-degree day in the Big Apple and the experience of playing alongside the West Side Parkway with the skyline in the background makes for a pretty cool story.

#mubb took advantage of the nice weather for a walkthrough on the Hudson River Parkway this morning in NYC prior to this afternoon’s game against Georgetown in the ⁦@BIGEASTMBB⁩ tourney. pic.twitter.com/3nE9xlUsMT

This isn’t the first time that Wojciechowski turned to the pavement for practice. Marquette was off to a slow start to the 2015-16 season and traveled east to play in the Legend’s Classic in Brooklyn. Upon arrival, coach had his team practice at McLaughlin Park with hopes of getting back to the basics. After beginning 2-2 that season, the Golden Eagles went on to win the Legends Classic and just barely missed out (they were robbed) on the Big Dance at 20-13.

Wojciechowski’s playground practice will have to work the same magic that it did in the Legend’s Classic six years ago for Marquette to reach the NCAA tournament. His team is 13-13 in 2020/21 and faces 8-seed Georgetown as a 9-seed in the first round. To go dancing in March Madness, the Golden Eagles have to win the Big East Tournament and top-seeded Villanova is waiting for the Eagles in the second round.