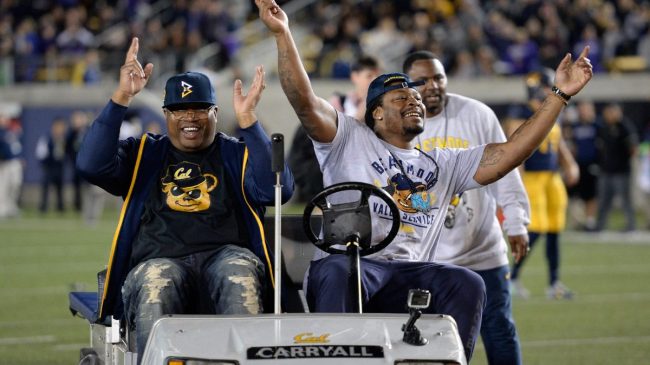 Marshawn Lynch made some major headlines over the weekend.

The former NFL running back is now a minority owner of the Seattle Kraken hockey team. Lynch is one of the organization’s two newest investors, joining Seattle-based rapper Macklemore.

According to Forbes, the team is valued at $875 million, though the details of Lynch’s investment were not made public. He did comment on the new ownership, though, saying that this was something he “never would’ve imagined.”

The newest minority owners of the Seattle Kraken, per @cnbc:

This is nothing new to Lynch, who’s already owned a professional team in the Fan Controlled Football league alongside former teammate Richard Sherman.

While the Kraken didn’t necessarily need more investors, something drew CEO Tod Leiweke to Lynch. That attraction came from his interest in community activism, which Leiweke says was a “big deal.”

Lynch is now becoming a much bigger part of the organization, and it looks like he’s made himself quite comfortable.

Lynch was taped doing doughnuts on the team’s Zamboni to celebrate his new stake in the team. Check out the hilarious video below.

Now that this has been made public, I can finally share this video of Marshawn wheeling a Zamboni at the Kraken practice facility. What a legend. https://t.co/MZLDnqdcsO pic.twitter.com/PmVewcE1tm

This brings back some feelings of deja vu to his days as a college rusher at the University of California.

Rather than a Zamboni, it was a golf cart, which he decided to hop on and drive around the field after a big win.

13 years ago, Marshawn Lynch took a training cart for a spin 😂 pic.twitter.com/2hEZ5bR1T0

It seems that not much has changed for Lynch over these last 15 years. But now, instead of playing for the professional teams, he’s now owning them.