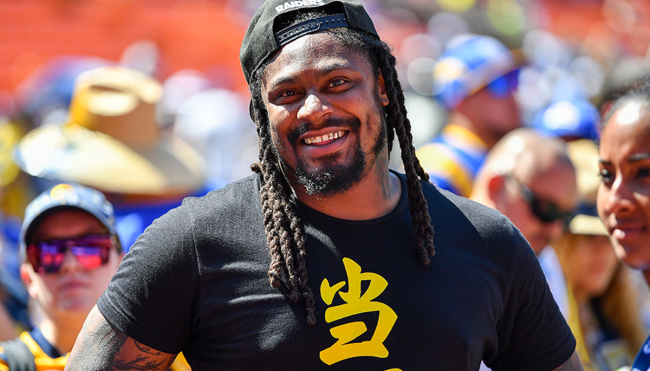 It’s been almost 15 years since Kenny Mayne joined forces with a rookie running back by the name of Marshawn Lynch in an attempt to give Buffalo’s electric nightlife scene the respect it truly deserves.

In addition to shining a spotlight on happening hotspots like Applebee’s and Dave & Buster’s, the video also provided a lot of viewers with their real first look at a man who would go onto establish himself as one of the most dominant players in the NFL and one of the most entertaining guys to ever play the game.

Given their long history, it was only fitting that Lynch stopped by Mayne’s final episode of SportsCenter prior to his departure from ESPN later this month shortly after Aaron Rodgers stopped by and deployed a Marshawnism to avoid having to answer any real questions.

Lynch, on the other hand, was more than happy to speak his mind on a variety of topics—including how he’d handle things if he was tasked with welcoming aliens to Earth.

The key to interviewing someone is asking the right questions pic.twitter.com/fCoBOACcWS

Based on his plan, I think this man needs to be named our Official Intergalactic Ambassador as soon as possible:

“We’ll politic for a minute. I’ll see what they got going on. I mean, if they’re some cool aliens, then maybe we can put it together a little later on.

But if not: ‘You know what? Y’all be easy, man. Have a safe ride back to wherever it is y’all going, man, but we’re just down here, kicked back, moving and grooving down here on Earth.'”

That sounds pretty damn foolproof to me.