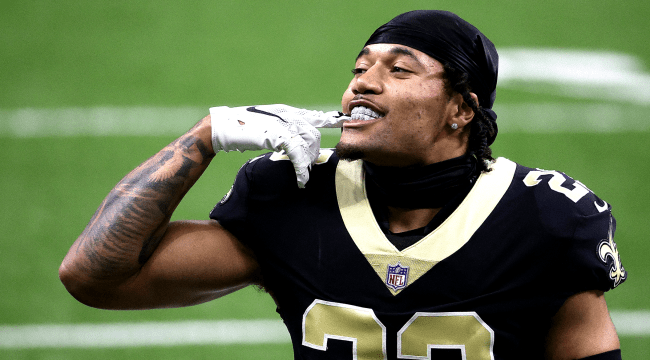 Every now and then a headline appears on the internet and I am 100 percent compelled to click on it. “Marshon Lattimore Gun Arrest Video … Cops Warned NFL Star ‘You’re Gonna Shoot Your Dick Off'” is one of those headlines.

I mean, really, does there even need to be an article about this? The headline says it all.

Okay fine. The video where the cop tells 24-year-old New Orleans Saints cornerback Marshon Lattimore that he’s going to shoot his dick off was taken on March 26th of this year, according to TMZ.

Lattimore and three others were stopped in Cleveland on March 26 after cops say the driver of the vehicle had committed multiple traffic violations.

In video of the stop, you can see officers swarmed the car immediately … and confronted Lattimore right away.

In the clip, cops say they smelled a strong odor of marijuana coming from the car … and then asked Lattimore if there were firearms inside the ride.

Eventually, Lattimore revealed he DID have a gun on his person … and told cops it was located in the groin area of his jeans.

It was at that point one of the police officers removed the gun from Lattimore’s pants and told him, “You’re gonna shoot your dick off.”

Another policeman then chimed in, telling Lattimore, “Get yourself a holster, brother.”

As funny as that is, the video somehow gets even better when one of the cops, while conducting a search of the car shouts, “You play for the Saints?!”

With that confirmed, the police officer informs Lattimore that he need not put himself in situations like the one he was currently in, saying, “It’s not like you’re a, you know, f***ing chump out there, bro!”

Oh. When police ran the numbers on Lattimore’s gun it showed up as stolen. Whoops.

The former Ohio State star and the three other passengers ended up being arrested and booked into Cuyahoga County Jail with Lattimore being charged with possession of a concealed weapon (failure to notify) and receiving stolen property – a fourth degree felony.

The other three passengers were charged with having weapons while under disability and improper handling of a firearm in a motor vehicle.

Lattimore’s attorney, Marcus Sidoti, claimed the whole thing was nothing more than “a misunderstanding.”